After not sleeping so well in the hostel, I did plan to get up early to get to the border with Jordan early as it is probably a long and complex process to get through.  Firstly I got a bit lost.   My Hertz car rental map of Israel has a small square piece showing Eilat and its coast line, but only the middle piece.    Nowhere on how to find the border.   It was nice to stroll past the Vegas-eque style hotels, with plenty of wannabe-blinged-out-new-generation-Red-Sea resorts to come still being in the midst of a building site, one of them even has some kind of water ride next to it I think.  Although there was a picture of the Red Sea being parted with Moses and his people going through, I didn’t get to learn about any history about this place from a biblical perspective.

Heading northwards past this fairly dinky sized airport.   Not sure which flights come to Eilat, I can’t imagine people would want to fly from Tel Aviv, ok its 6 or so hours by bus, but maybe for Jews from Russia/ex-Soviet Union wanting to check out a seaside Israel that is a little different and cheaper than Tel Aviv.   After the airport I went round the outskirts of a salt mine and past a farm with mostly date palms, after heading initially in the wrong direction which sounds daft as I can see the mountains of Jordan in the distance, and the town of Aqaba but no border, it just happened to be behind a road where another field of palms was concealing.

At the border I met three young men who appeared to be from Europe there which I was hoping if we could share a taxi ride to Petra once through the border, these chaps were from Estonia but were actually just inquiring about coming another day as they were yet to book accommodation in Petra.

At the border it was much easier than I imagined.  Apart from heading from Germany into Poland in a road trip with friends about nine years ago I have never been through a border control between two countries before.   Here I had to show my passport, pay some shekels for the border fee, get a boarding pass (erm, I’m not going on a plane?)  get passport checked again, get bottle of water from vending machine, then a brief walk over a tarmacked road over to the Jordanian border control, the Israeli authorities were thorough but seemed professional, I had my bag x-rayed and there were a few questions asked about what I was doing here as they saw the volunteer stamp on my passport but otherwise ok. where I did the same thing all over again, only one lot of water of course.

The first small booth at the Jordanian office was very different, there were three men that looked like criminals with their three guns and partly used cigarette packets on the counter, rather than speak through an open window I had to get round the back and get my passport checked there, in the main office the three different officials I spoke to were all smartly dressed in uniform and seemed ok.

Most people have told me the only way to get from the IL/JO border to Aqaba is by taxi, this put me off a bit as I knew this was going to eat into my budget.  The next bit was different, the border was so quiet that day I was really hoping to be cheeky and to ask some other people in terms of sharing a ride to Petra.  There were two different taxi drivers hanging around smoking looking fairly bored and were intent getting me to ride with them there and then, where I was hoping for someone else to come over to share.   I decided that the town of Aqaba was only less than a mile away from here, so I could just walk and get a bus from there.  However I got stopped in my tracks by an official who said I could not leave the car park as the road ahead was a militarized zone, walking was not allowed and therefore I had to travel in a proper taxi.   So I ended up paying the 50Dinars (£45) to get ride up to Petra.

Jordanians are extremely friendly and me and this taxi driver had a good natter about all kinds of things, I was mainly intrigued to find out about the Hashemite Kingdom, the royal family, Petra’s visitor centre (Petra, the town itself is actually known as Wadi Moussa) and Wadi Rum.

Looking at Jordan as a country looks pretty empty, and it is, its mostly desert and the population is a bit less than Israel despite being  three and half times bigger.   Since the 1967 war, Israel and Jordan have pretty good relations and the Yitzak Rabin border crossing (the most popular way to travel between the two) border opened in 1994, a year before the then forementioned Israeli prime minister was assassinated a year later.

The road winding through mountains are pretty nice too, looking a little like driving through the desert in a national park in a US state like Utah.   The drive even let me stop on a bend to catch some pictures of one of his favourite spots, and also a brief stop at a shop to get some more water.

After a couple of hours I got to Petra itself.   Oddly enough the expensive hotels that part of famous chains have their branches at the top of a hill, as the road zigzags several times down as you get to the Petra visitor centre.   I got to visit an internet cafe as I need to double check the exact location of my hotel, there was no printer to make a hard copy of the map I needed but the man at the bar pointed me back up the road a couple of bends backwards I needed to head.   I got to find out why the best hotels are some distance away later.

Petra, sorry Wadi Moussa itself as a town is fairly basic, I knew this was not going to be the same league as Dubai or Jeddah as an Arab city, it is a lot smaller than I expected to be and quite dirty and not at all modern.   I stopped into a bakery to grab some food, the cakes and bread are quite nice but totally different to bakeries in Jerusalem.

I got to my hotel and checked in, my room is small but I had a double bed (it was the same as a twin or single room so I thought why not)  and had an ensuite bathroom is a quite tiny door by the window. 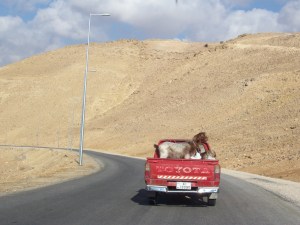 I locked my non-essential belongings in my room and went out to take a tour around the town.   In the centre of town is a festival involving lots of people bringing Toyota pickup trucks full of goats and sheep, this is for the Muslim festival of Eid, where families have a feast by buying a sheep for slaughter

Just before I went to bed I met up with a bunch of four Australians who were going to fly back the next day, so I had dinner with them, and chatted about different bits of the middle east we had seen, with my experiences in Jerusalem and they had been in Cairo.

After this I was off to bed, I was in for the worst start to the day I have ever experienced!!!!