Hope that two serialised stories of this and Bethlehem running together doesn’t get too confusing!!

This is part of the trip I was most looking forward to, the scene from Indiana Jones and the last Crusade, even before I left Jerusalem, I bought a CD off ebay of the official soundtrack and put it on my ipod and have got a little bit obsessed in repeatedly playing the tracks whilst on my voyage around the Red Sea. 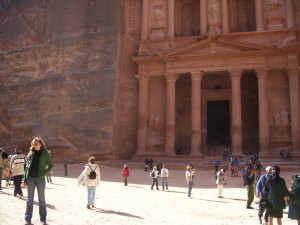 I spent the whole day looking around Petra, the temples built into the side of rocks, the mountains, the various different ruins of all kinds, there is absolutely loads to see here, you need a couple of days to see it all.

Odd looking Swiss cheese style rocks and caves are everywhere, and one cave has been turned into a quite inviting looking lounge with comfy looking cushions and furnishings.

The cops. The mounted Jordanian police look every bit as cool as the Canadian Mounties

Towards the end I saw some other British people I got chatting with on top of a hill which which took a while to get up you can see almost over towards the Dead Sea, in fact my phone (which doesn’t have roaming enabled and wont get a JO network, shows Cellcom IL with 5 bars).  There was one girl who had been working in Dubai and got a long weekend off because of the fact it was a Islamic holiday, the other two chaps were two friends that had been travelling around the middle east and were on the last few days and travelled over from Cairo, so it was nice to chat about my discoveries about the holy land and the others who had been in a modern rich Arab city and in the famous ancient capital of Egypt.

At the top of this hill was a tent with a Bedouin chap living there who was playing an Arab style guitar like instrument, and provided us some tea, he told us that his tent was his permanent home, although was selling some souvenirs didn’t seem that concerned about trying to sell us anything, he like a lot Jordanians I had met was genuinely very hospitable to visitors.   All four of us where chatting for sometime, but I noticed it about 4:20pm which meant it would start getting dark just before 5, so we ought to start leaving as getting down the hill was long, windy and undoubtedly extremely dangerous in darkness.   The park shuts at dark according to the main gate, however perhaps in a moment of wanting to live just a bit dangerously, we just carried on chatting and drinking tea, by 4.45 it was most definitely dark, this didn’t bother us as one of the British chaps had a ‘headlight’, a torch on a stretchy band he was wearing on his head so he went down the steep steps first.

We were negotiating our way out of the Roman style pillar stones in the middle of the park and it was now in complete darkness, the girl (argh – wrote you folks emails on a bit of a paper which I have now lost..) said she had to meet the man who was taking her home in a car park near a restaurant.  One of the chaps took her back there, as she was going to go alone which would not of been wise, later I met up with the boys by the pathway that weaved around the main temple.

Close to the entrance there were two men and pick up truck around a horse which was lying on its side, it was obvious the animal was quite distressed, considering I have seen people whip their donkeys to get them up hills with tourists, this animals are worked extremely hard, having said that I am guessing good horses and donkeys are expensive and I guess this was a vet in the truck come to provide assistance to the animal there, the boys from Egypt were hoping to get a quick cheeky snap of us by the main temple in darkness, but one of the staff saw us and told us we should of exited the park over 45 minutes ago.  We said our goodbyes, as I suggested we go for a pizza in the main high street but they wanted to go home and get an early night.

Next, yet another rude awakening, a hasty scramble to get to Wadi Rum..