I heard from two people I know that some Christians were following some really peculiar teaching that the world is flat.  This sounds silly but this odd idea have been growing in popularity recently.   Flat Earth followers consider the world to be a flat disc and that the sun and planets revolve around us.

Here’s some examples of the Old Testament (I’ve used the NIV here, some bits but not all look more sensible actually in KJV) that Flat Earth people might use to justify this weird idea;

Ezekiel 7:2 2 “Son of man, this is what the Sovereign Lord says to the land of Israel:
“‘The end! The end has come upon the four corners of the land!

Jeremiah 25:32 This is what the Lord Almighty says: “Look! Disaster is spreading from nation to nation; a mighty storm is rising from the ends of the earth.”

Job 37:3 He unleashes his lightning beneath the whole heaven and sends it to the ends of the earth.

If you look up these links for Ezekiel, Jeremiah and Job you can see the word אָֽרֶץ (Eretz or H’aretz, land or the land)

The word Eretz is used a lot in Judaism, its used in the blessing of the bread that traditional Jews do on Shabbat.

Baruch atah Adonai, Eloheinu Melech Ha’Olam Hamotzi lechem min haaretz.
Blessed are You, L-rd our G‑d, King of the Universe, Who brings forth bread from the earth.

Israel has always been known as Eretz Israel (Land of Israel) too.   There is even a newspaper in Isrel caled Ha’aretz.   (The Land)

We know from the Hebrew language this word is a little ambiguous.  The word can be the ‘world’ or it can mean the ‘land’

Meanwhile, in the New Testament, here is a wonderful message of Jesus to his followers:-

Acts 1:8 But you will receive power when the Holy Spirit comes on you; and you will be my witnesses in Jerusalem, and in all Judea and Samaria, and to the ends of the earth.“

Lets now look at the Greek here:  You can see the Greek word: γῆς (pronounced “ge”)

Strong’s Greek shows just like the Hebrew, this word can also have two meaning.   Land and Earth.

For people to think that space agencies are lying and the world is a flat disc or square with Antarctica is a radial edge, and that the bible is supposed to say so, only makes look a bit silly.

Science and the bible do work together very nicely!

This is a long but great teaching.   There several other parts afterwards.

In the last few years I’ve come across situations where I need to pray in a different language (gift of tongues) over a dangerous situation.  I’m still fairly new to this, and my current regular church doesn’t speak on it.  In the past I’ve been put off by other teachings on this subject.

Derek Prince is one of the best teachers on this and this is great resource for ordinary Christians looking to move forward in their spiritual life, not just for those in academia or theology circles.

I find it best to copy this to your iPod or other MP3 player using something like convert2mp3.net and listen on a bus ride as I have done.

This is an old article I wrote in 2012 whilst in Israel, which I never finished, not previously released.   Here is Part 1.

After meeting up with and chatting to a gent who commented on my previous blog post about Peace monuments, here is another selection of gifts from foreign nations have had as well intended but often headscratchingly worthless items that are put on street corners. As I mentioned before, Jesus talks about ‘false peace’  and its true to say there are plenty of examples of this. Here’s one over the West Bank:

Some well meaning people in Italy gave this monument to the Palestinian people in Bethlehem.   Think they could of got someone to do a better poem than this.  This artwork reminds me of all those tacky digital countdown clocks that were in pubs in the UK in 1999, did they all go in the bin I guess?

This bell comes from Japan! Its in Gan Sacher Park, Jerusalem. Here is another not so legal way of trying to get peace: 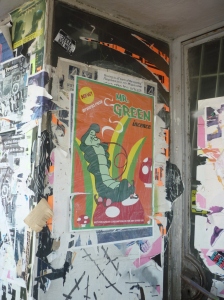 This poster was in a sleezy looking street in downtown Tel Aviv.  I did see before certain types of drugs that promote a legal high, that are yet to be outlawed, and that exact impacts of health and not yet known.

Back when I last visited my home city of Portsmouth, UK, there is this: 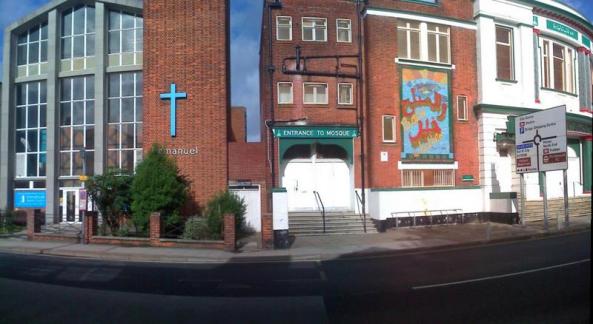 A traditional style church, next to it is a large mosque that used to be a bingo hall and previously a cinema.   This new Peace design in English and Arabic on the wall seems quite eye catching.   However, I don’t really see peace in Islam, but I do know that Jesus loves the Muslim people and wants them to find him as Lord and savior.   There are a few believers in Portsmouth too who left Islam behind.

For a while now, I have had an urge to pray for Asian and Arab people in Portsmouth who peace, fulfillment and eternal life are only found in Christ, this serves as a good reminder for me to do this. 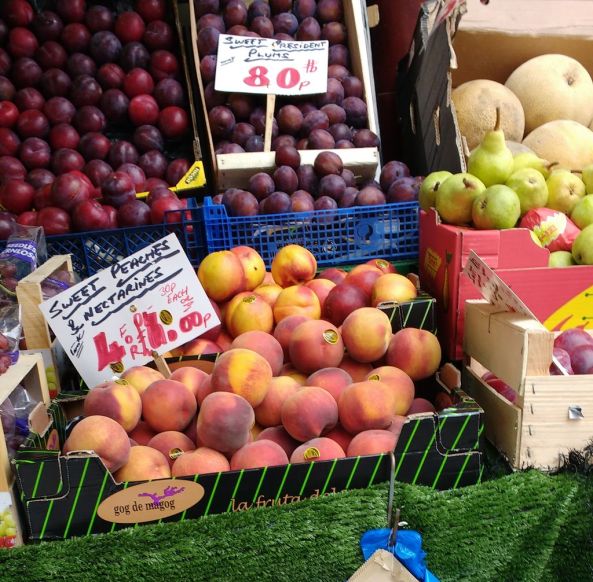 Ok what’s weird about this picture?

I’m sure the shop I went past during my lunch break near Camden Town in London didn’t notice.   This particular company selling fruit, in this case nectarines (which were very nice, as I did buy one)   The box is marked “Gog and Magog”

Revelation 20 : 7 When the thousand years are over, Satan will be released from his prison 8 and will go out to deceive the nations in the four corners of the earth—Gog and Magog—and to gather them for battle. In number they are like the sand on the seashore.

These are the only two bits of scripture that refer to Gog and Magog.   I’m thinking the Italian company who export their fruit probably consider Israel’s own agriculture to be a big competitor and calling themselves a biblical enemy think it would be hilarious.   It seems sad and quite bad taste.