After getting through the border back to Eilat, I walked – as I don’t tend to get buses in strange places as I always seem to end up going somewhere wrong – and got back towards the middle of town, quite a long walk of a about 3 miles, past the small airport and dumped most of my belongings back in the hostel, and ate some bread and chocolate spread and some other stuff to eat.

I saw an African family come into the hostel, they were poor and were asking for help as their young girl had not eaten that day, I gave them the other half of my bread and other people gave them something.   It turns out that this family are Sudanese, they are mostly Christians (but not Jewish) escaping persecution, living in Israel with a special visa from the government to stay here, there are quite a few Sudanese families in Eilat, it seems they have probably walked through the Egyptian Sinai to get there too!!    Work in Eilat is probably mostly seasonal as its a tourist place but I think there are labourer jobs in the number of construction projects (which are not so contested unlike Jerusalem and Judea & Samaria) down here.

I really wanted to see the aquarium, but I couldn’t find it as I assumed it was on the middle of the coast line somewhere.  Instead I found a strangely painted car I wrote about previously.  After asking in a tourist information office, it was on the west edge of the sea, heading on a road towards the Egyptian border.

Ok, I decided to walk and head southwards.  On the way there are military stations here, being at the top of the Red Sea it is important to keep this defended, there are shipping cranes here and I saw large numbers of new cars which I think had just come off a boat from Japan.

Its generally accepted that Egypt is the best place in the world to go Scuba diving, but as Eilat in Israel is next door, it probably comes a close second, I saw some specialist shops where you can buy or rental diving gear, as well as Caribbean style bars out the beach, one of the first tourist places I saw was a place which children can swim with dolphins, sounds pretty exciting but it is 300 shekels per child (that £50)  probably best left as a special birthday day out I think. 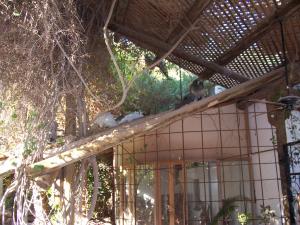 Eventually being only about a mile away from the Egyptian crossing, I came to the famous aquarium, this was a 90 shekel fee for basic entry but worth it, for a bit more you can have a ride in a boat with a glass bottom around the Red Sea.

The aquarium also some giant tortoises!

At the end of this unusual pier has the best part of this place – go up and you can see views over to FOUR countries, Egypt, Israel, Jordan and Saudi Arabia…. 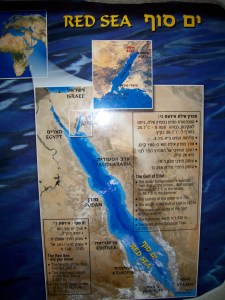 Go down the bottom and you will see why there is so much fuss about the Red Sea, there are glass windows that show under the water, the fish here are absolutely amazing!!! 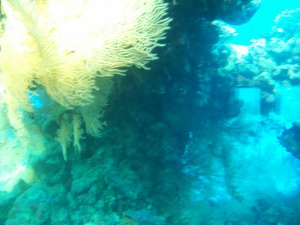 Where as its not so easy to get good shots through the glass, the water is beautifully clear, and when you see those little orange Clownfish now made famous by Disney, like to hide and poke their little noses through the coral, is so damn cute you will want to be sick!!  There are scores of every type of exotic fish of every colour and shape.   I even seen about a dozen stripey yellow fluorescent fish with another dozen purplely ones, it looked like a fishy football match going on.

After coming out of the aquarium, I decided to take a quick look at what was a mile down the road.  There were some Arab people having a party and barbeque on the beach with some tents but round the corner was a gateway to a new continent – Africa! 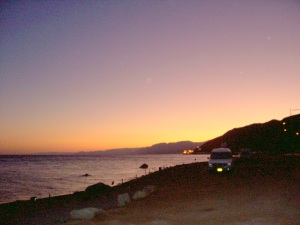 Beyond these lights on the left and the building I am standing (it was quite dark as you can see) is the border to Taba, in Egypt.  Quite tempting to go there, but Egypt is a massive country about 50 times bigger than Israel, and to see all the juicy stuff like Cairo, Alexandra, Valley of the Kings, and the Nile etc takes a 19 hours to get through the Sinai on a bus.   I did see lots of Nigerian Christians queuing up at the border.

On the way back in the middle of a roundabout was these funny looking models of a submarine and the tower at the pier at the aquarium.

Later on the hostel forgot to actually write my booking for a room down in the book, despite me booking it, and it was full!  Therefore I slept on a sofa on the outside lounge which was fine, people were not too noisy and the temperature outside was just right, this way cost me half price, although in the morning I had 3 large mosquito bites on my head.  The next day it was a time to chill out and chat to the other peeps at the hostel, then get back on an Egged bus back to Jerusalem.

Eilat is a very touristy place, there is no doubt about that, but its generally quite tasteful (the hotels are verging on trying to copy Vegas a bit though) and very safe, I like the good shopping malls, clean beaches with nice outdoor bars, and of course the aquarium.  Its also handy is a cross over point between Egypt and Jordan, although do you research on visa stuff before as you will get asked everything about where you have been, where you are going and who you are going to see.  I just wish it had a better road that connects it to the rest of the country, as its narrow single carriageway, and I am not sure if the tiny airport goes to any regular European airports.

For this reason the hostel gets a thumbs up for the really nice staff, location, the fact its staffed by Christians & Jewish believers, free tea and coffee, and has an optional free bible study, but not so great marks for forgetting my reservation and not having paper towels in the toilets, and could do with better sign posting of some sort, – still I will definitely be back there again, if I head that direction!! www.shelterhostel.com

Petra is best given at least two whole days to visit, there is so much to see there!!!

Wadi Rum was ok, but not a great tour due to staff not knowing an awful lot about the places there, having poorly maintained and dangerous looking vehicles, and asking some visitors like me to lie (!?) to the national park authorities.  All the Jordanians I met were very friendly though and not just for the purposes of expecting business.  Of course a lot of trips could be judged by how much you are happy to leave comforts from western country and rough it to some degree.

If you are bringing your iPod, I would highly recommend Chicane’s Behind the Sun album, a good selection of trance tracks that go well with the beach vibe that is Eilat, and of course I got the best of Indiana Jones soundtracks to play while I was around Petra 🙂