IT things, skip down a bit if not your thing 🙂 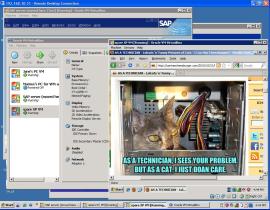 At work I have been using Virtualbox to manage virtual machines.   As an open source replacement for VMware or Microsoft’s VirtualPC I like it, its got the backing of Sun Microsystems (now owned by Oracle)  There are regular updates and active forums for support.   When I first heard of it from a colleague 3 years ago, you can literally throw almost any operating system at it, I used one of the first betas of Windows 7, various Linux distros, and things like Android, the fast becoming popular phone operating system, and all of these worked first time with very little issues.

In a nut shell, it makes a PC into multiple independent computers to run several systems at once, meaning less physical hardware to run servers, test PCs and other things.   The host (physical lump of metal) machine can be Windows, Mac or Linux.

This saves our organisation money as we have less actual hardware, patches and updates are easier manage and less power consumption and disk space used.

Each host that controls virtual machines has folders on the root of a drive as follows, with shortcuts onto the desktop:-

I wrote some documentation what I have done for work, this is not exhaustive, nor have I read much in the way of best practices for virtualisation.  But it is what has worked well for me.   At the moment I have a server which uses macros with Microsoft Excel and Outlook to process helpdesk app for our home repair team.   I didn’t create this system as there was no documentation for it, I took it off a physical PC, virtualised it and stored it safely on a dedicated server.   By stripping out unnecessary applications (Windows Media player, Adobe Acrobat etc) , it only needs about 8Gb of disk space.   I also have our SAP finance app which is on an Windows 2000 server box virtualised which made it one heck of a lot easier to apply patches and updates and do maintenance.   This week a normal Windows XP PC used by a member of staff who is the US which is only controlled by a VPN connection has been converted and stored the same way.

On the root of the drive I have made several folders on each host PC as follows:-

\live
– for real running machines currently used in production. When planning backups, these cannot be copied easily as files will be ‘locked’ as they are actively in use.
\backups
– Copies of critical virtual machines before making any changes. In the event of a change or update breaks the configuration, you can revert back to a previous build.   Make this folder sharable over the network.
\nonproduction
– VMs used for experimental use.  These don’t need to be backed up.
\isos
– copies of CDs, operating system media, service packs, etc. Instead of needing physical media inside the host, these come in handy, as you can do changes to the host remotely with VNC or Remote desktop (RDP)  and grab the CD you want from here.

This set up works well for a smaller organisation like us, feel free to comment if you have questions.

One thing I would like to ask, and that if anyone can recommend an app I can run on my host, to monitor network, memory, CPU and hard disk space to make sure I don’t overtax my server with too many tasks.