Its a while since I have done some exploring of places from the bible.  As I am at the end of the my second season I thought I would make up for lost time and see some places.

The weekend before last I try to get to Rachel’s tomb which is on the Israel/Palestinian security gate that goes between southern Jerusalem and Bethlehem.   This was something of a ‘ballagan’ (Hebrew for chaos, I am not sure if I wrote the Romanised spelling right 🙂 ) as I spent ages finding it, and seem to get different answers from everyone I asked.   I gave up and went home, and came back the following weekend.

This time I was given a different method to get into Rachel’s tomb.   At one specific gate into the border, intended for cars.  I had my passport checked along with this Asian-Canadian girl who was also going this way I was chatting  to.

I was asked by the guards, “are you a Jew?”  in which I replied no I was a Christian. “But you don’t wear a cross?” I was asked.   Maybe I should get one I guess.

I was told I could not travel by foot the 100 yards or so through the border, but he pointed to this blue Subaru driven by a religious Jew and told me to get in, I said I don’t know this guy, do you know him?   “its ok, he is a Jew, just get in!”   I was kind of shocked that the guards asked me to get in a stranger’s car, but I did it anyway and so do this girl.  The road winds in a sort of S shape in between the tall concrete walls of the Israeli/Palestinian border.   Unlike other parts of this wall as its so well guarded there is no graffiti here.  After only a minute of a very short ride, the car stops right outside Rachel’s Tomb. 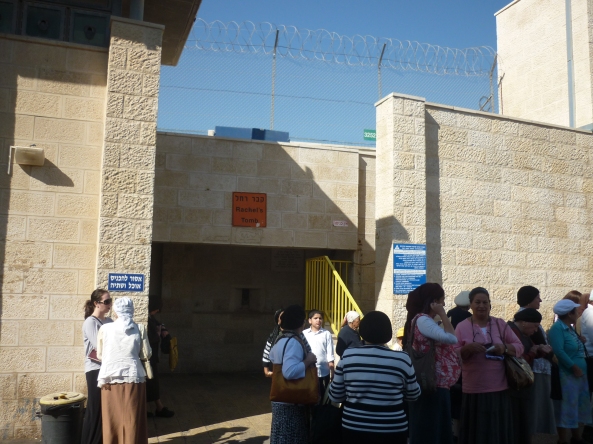 In the historical building itself, the building is heavily disguised in concrete being sandwiched in between the high security walls.

Once in, I don’t see much historical information in English outside the tomb itself.   Inside there is a longish corridor and then a partition which guides men and women into separate parts of the room.

When I go in its full of Orthodox Jews praying reading the scriptures, one of the reminds me I should have a kippor on, so he lends me one, and I decided to sit on a chair and pray for a bit.   It doesn’t seem right to take photos or explore a bit, so I leave.   The room feels the same as the archway next to the Kotel.

I was a little disappointed, as there was not much to read on history.  There really isn’t anything of interest to casual tourists.   Nevertheless its was exciting to see another place of the bible and see religious Jews visiting who value its sacredness.

Back outside, behind this unusual looking wall is some quite pleasant public toilets and a car park.

I take a wander down a short road which goes to a dead end to another vehicle sized gate.   There is construction work here, but in an empty square of land here nestled between the two security walls, so neither housing for Jews or Palestinians, more like extra offices or facilities for the border security.

On the way out of the border, I realised there was a bus service.  This bus does’nt go right through the border, instead it goes just to Rachel’s Tomb, thus not requiring a lengthy security check to get back.   There isn’t any kind of queueing, instead everyone just piles on, I let the women holding babies go on first.   I am not allowed to use my normal (Egged) bus pass for some reason, so it just requires me to pay 4.20 Shekels for this ride.   Religious women make up the majority of folks on this bus ride.   I can only get off about 1km away from the border, necessitating a short walk back to collect my bicycle.

I was reading this passage in the bible which talks about this place.  Genesis 35:16-21  16 – “Then they moved on from Bethel. While they were still some distance from Ephrath, Rachel began to give birth and had great difficulty.  And as she was having great difficulty in childbirth, the midwife said to her, “Don’t despair, for you have another son.”  As she breathed her l

ast—for she was dying—she named her son Ben-Oni.   But his father named him Benjamin.   So Rachel died and was buried on the way to Ephrath (that is, Bethlehem).  Over her tomb Jacob set up a pillar, and to this day that pillar marks Rachel’s tomb.  Israel moved on again and pitched his tent beyond Migdal Eder.”

This particular place is the centre point of news this month as the UN, Palestinian Authority and the Turkish Prime Minister have been saying the Rachel’s Tomb is a Mosque, see www.israelnationalnews.com/News/news.aspx/136173

I saw this quote from Christians Standing for Israel blog on Rachel’s tomb:- “You don’t have to be a Biblical scholar or a learned archaeologist to recognize the long-standing and incontestably Jewish nature of Rachel’s Tomb and the Cave of the Patriarchs. Arguing otherwise is akin to asserting that the earth is flat, Elvis is still alive and the moon is made of cheese, and that is how the Palestinian claims should be viewed.”

Because of the not so conventional method of passing through security, I can’t offer any advice on how to get through the border, you will need your passport and its a simple case of heading south from Hevron Road from Jerusalem southwards.   There is not a huge amount to see so I think its best left for bible history adventurers to do as something on the way to or from Bethlehem.  Right: coaches arriving from the Jerusalem side.

Tip:  if you want to converse with anyone, Jew or Arab to find directions to Rachel’s tomb, try pronouncing it like the French, ‘Raquel’  there is a better chance they will understand you.