After finishing visting Akko, I thought I would get back on the train, and head north one more stop.

Israel’s north bound railway comes to an end at this station.   There are a couple more towns above before you get to Lebanon.

A little worrying that this buffer stop looks not really adequate for the job, and on closer inspection appears to be leaning back a bit as it looks like its bumped at least once by a train.   Behind is a simple chain link fence and a main road.   Could do with a sand bank or something maybe.

There is as well, left behind pieces of track across the road that continue further north, as it once went all the way to Beirut, once upon a time. 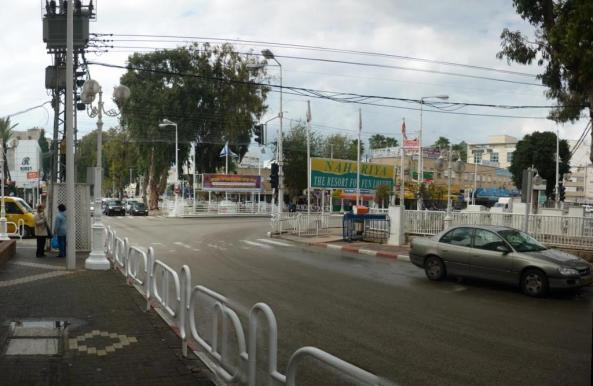 In the centre of town, this big billboard shows “The resort for fun lovers” The blue and yellow pattern looks like a reverse Ukrainian flag, wonder if its influenced from immigrants from the ex-Soviet states.

From what I read, this city was found in the 1935 during the British Mandate period and became a city in 1961.

This river that flows out from the middle of the city to the Mediterranean is carrying a lot less water than it ought to, showing the urgency of the drought problem here. 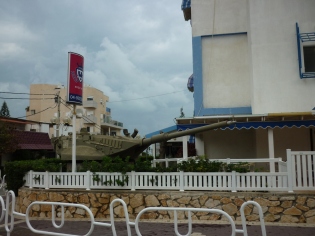 A tank rotating gun section in the front of the garden of this hotel, upon closer look, there is a plaque in Hebrew which appears to be there in memorial or a young soldier who died in battle.   An unusual shrine maybe.

Nahariya has a pleasant selection of different shops and nice beaches, but it is quite touristy, there wasn’t much history I could find there.  I walked a couple of miles north up the beach toward a tall hill, as I wanted to find the ski lifts that go up and down some cliffs towards the Lebanese border, but I couldn’t see them, the hills ahead were probably a good 6/7 miles further ahead, so I decided to call it a day and get the train back to Netanya.  Discovered that I am going to those cliff tops with a short break with work in a month or so. 🙂

Haifa and mount Carmel next!