Camping! I went and spent a weekend with some friends, two from the Netherlands, one South African and one Hispanic Jew who has been Israel for some years now.

Its funny in an age where we try to make our lives more complicated with technology and creature comforts we still want to escape to basics of living under a piece of canvas with just the bare minimum to enjoy being out in the open air.

The Dutch seem to be the most hardcore campers in Europe, and where as I have had a fair bit of experience in camping up in Yorkshire and the New Forest as a child, my friends from this part of Europe seem to be very savvy as using gas cookers and putting up tents.   In addition to that my friend from South Africa was brought in a farm so is very adept at outdoors living also. 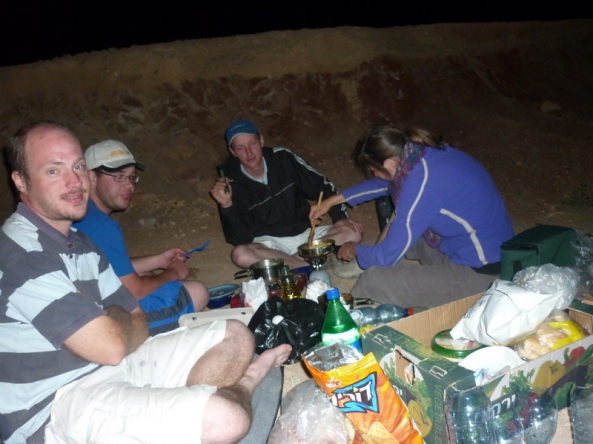 I have been to this site before back in about August 2009.    This is inside the Ramon Crater in the middle of the Negev Desert.

Some people opt for a more sophisticated camping experience, needing proper showers.   We opted for a site just rocks and bushes to use the bog.

This site we passed on the way home, just being a bit cheeky using the toilets that were by the road.

Here you can park your tent on the ground or inside the bedouin style huts, which look nicely made.   There is a kids playground in the middle which stands out as a bit odd!

This picture I took out of the window of the car is not that great, but it was a small clip of a large shanty town style village, these are Druze, traveling Arab people who live Bedouin style today often by the side of busy roads.  They may have cars or camels or donkeys and often grow their own groups in their communities.