I went over to the Kotel (Western Wall) after meeting up with some friends to practice Hebrew in a coffee shop and before heading to church on Sunday afternoon.

When going down some steps about to enter through a security gate through the south-west corner of the Kotel Plaza, I got a glimpse of this:- 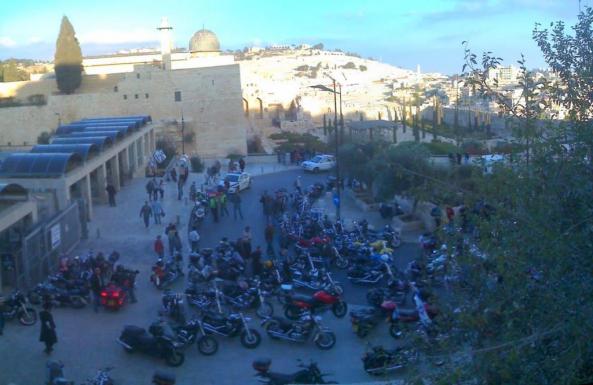 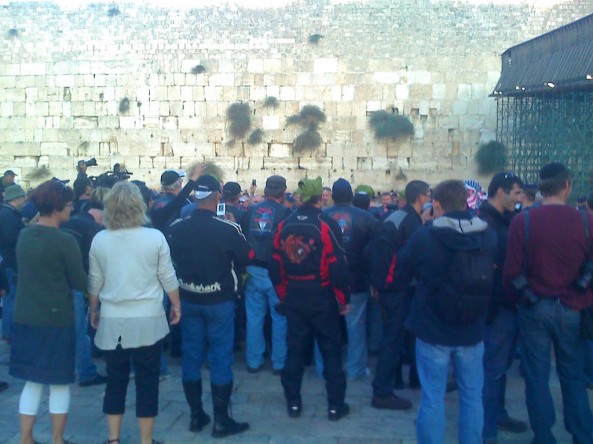 These men were doing a private prayer by the fence in front of the wall.   I couldn’t resist

chatting to them, turns out a few of them were Israeli bikers but most were on holiday from the US, some were Jews and most were Christians, but all of them had come to show support for Israel and the Jewish people and were here on a road trip and had their precious bikes shipped over here.

A lot of them had these special printed leather jackets for the event, and patches, tattoos as well as beards in size rivalling the Orthodox Jews there.

This was a welcome change to see folk in their closeknit motorcycle club showing support for Israel as opposed to daft protesters in silly million dollar yachts off the coast of Gaza, who had gone from Tel Aviv to Jerusalem and were riding to the Dead Sea the next day which sounds great fun considering the breathtaking views of the desert when you head down there.

This was a great surprise to see at the Kotel, and it also made today’s Jerusalem Post too.  I know the Israeli government have been trying to branch out to niche tourism, ie: health conscious people going the the Dead Sea, so maybe they could market the holy land to more bikers too.    A ride all the way down the Negev desert with a beer waiting on a beach side bar on the Red Sea resort of Eilat sounds good to me!   For the time being I have to make do with my push bike which I ride over about four different sets of hills 6km every day to work!