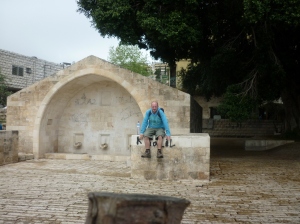 Nestled in the middle of Nazareth’s high street I walked past the Mary’s well monument, this picture was taken from my first journey.  Now some of the grafitti has gone and some more has appeared, along with an official sign telling people not to drink the water, reason being is at the back of the monument there is a discarded big wooden drum for keeping electric cable, and lots of rubbish, and an odour hinting its been used as a toilet.  Sad that Nazareth’s iconic centre piece in the middle of the city isn’t respected by some people.

Back to old city streets:-

I went to the Synagogue church again, this is the place Jesus made his debut as a Rabbi, a teacher of the Torah as part of his youth.   Today there was a different door open with a talk being given I wanted to take a closer look but didn’t want to interrupt the teaching here.

I was kind of disappointed by the Vatican flag hanging up here.   I don’t really care for the oddball palace in Rome as it has little to do with the teachings of Jesus and doesn’t really fit in here.

In the market place there is everything from fruit, vegetables, home made olive oil, cakes, clothing, cleaning supplies and books on sales outdoors,

I was a bit perturbed by some of these, as you can see the middle ones look like they have more than a hint of antisemitism to them.   There was also people casually selling Keffeyahs, like I saw in Jericho, neck scalves made famous by Yasser Arafat, these tend to have a very political edge to them.

The youth hostel I mentioned earlier I stayed in is run by a Christin Arab family, its a beautiful place, there aremaps and guides available to plan what to see.  I didn’t see anything in the way of obvious Christian literature, ie: pictures of Jesus on the walls there, unlike Jerusalem its kind of interesting to hear Arab people speak a mixture of Hebrew and Arabic, but I was a bit annoyed that the local man on the desk seemed to use the Lord’s name in vain quite a bit.  Ok, they probably aren’t religious, there is a youth hostel in Eilat owned by Messianic Jews that does have bibles and Christian books there.   I am guessing if you go to a youth hostel in Memphis, Tennessee you would see photos of Elvis there I reckon!! 🙂

Some people may think I am being overly romantic about Jesus’s home town, Nazareth has an entirely Arab population and around 30% of these are Christians, but I was hoping to see more Christians, particularly people who could pray and intercede for people here, especially when you seen provocative posters put up like this.   Someone has tried to deface this quite recently it seems! 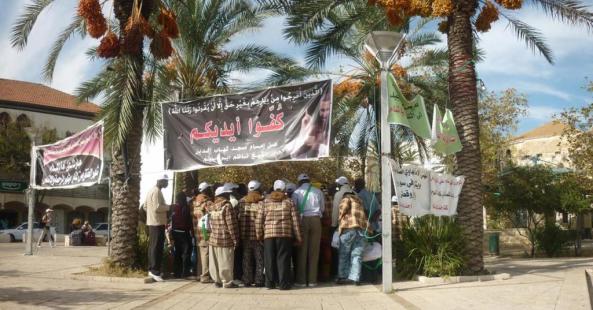 I would like this know what these posters say, I suspect they are just as poisonous as the previous above.   By the way, these are Christians from an African nation on a tour with nice tartan matching jackets.

Along with not seeing any of the visitors of Christian background at the hostel, many of the experiences of this day left me feeling kind of depressed.   Of course Nazareth is reliant on tourism and aspects of businesses here tend to be geared towards this, but this should be a special place, but churches seem like relics of history without any modern day meaning, Nazareth is important to our Lord Jesus and his Jewish upbringing, a lot of the things seem to be anything but.  Of course, there are minarets nearby, the tall very vocal prayer towers that Islam feels obliged to share with anyone else around.

Trying to sleep was an awkward experience, mainly because the beautiful old house that was a hostel had these big wooden shutters on the windows, and the heavy wind outside was causing them to bang loudly, getting up half a sleep to try and wedge them shut seemed impossible as the latches were broken.   Part of this I think was the Lord was prompting me to pray for my fellow travelers who had come from different backgrounds, a few with some mixed up views about their spirituality.

The Saturday evening meant I got to meet three chaps from New Zealand that were Christian, I was glad to see more believers here.

Am I trying to put Christians from visiting and show Arabic culture as being negative in a Christian light, no – some unexpected surprises happened as I will explain later….

1. The Fauzi Azar – 2. The uglier sides of Nazareth – 3. Welcoming the king with palm leaves? – 4. Looking for the Jesus village – 5. The replica village of Jesus – 6. Today’s Nazarenes

4 comments on “Return to Nazareth – 2. The uglier sides of Nazareth”