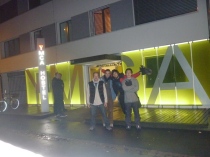 Outside the very modern and comfortable YMCA in Basel.   I hooked up with two other chaps from here, one is from Argentina and one is Chinese.

Just about 11pm, New Year’s Eve, this church had people on a balcony doing playing brass instruments for a while, then there was a church service at 11.30, instead, we headed down to the river.   The city was treated to a pretty nice fireworks display which lasted about 20 minutes, some of the pyrotechnics were coming from a different direction from some distance away, maybe from France or Germany which are only less than a mile away from here. 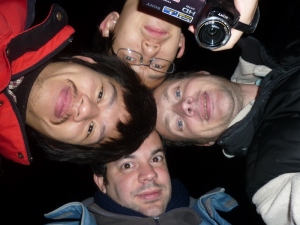 Had a bit of a sleep in, although didn’t actually drink the night before, took a wander down for breakfast, my new friends were not there, as they were heading to Italy.

This was part of breakfast in the canteen type area 🙂  Actually only 2 small pieces of cheese were laid out at a time on the table, as if people might of been pinching it and putting in a bag for lunch later.

Later I got to head to my good friend Matthew’s house for lunch, he introduced me to Raclette for lunch… 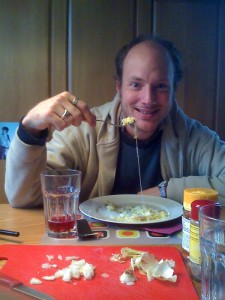 Raclette is cheese put in a small purpose designed table-top grill in small metal shovel type things, once melted your scrape it off onto your plate and serve with potatoes and other vegetables.   I was warned that non-Swiss people tend to not able to eat that much, he was right, I had 3 and half pieces, I was full, I guess eating cheese with the Swiss is like trying to playing drinking games with Russian people!

I got on a tram back to the centre of Basel and walked to the Youth Hostel to pack my things and get a train to Interlaken, a small town surrounded by the Swiss Alps.