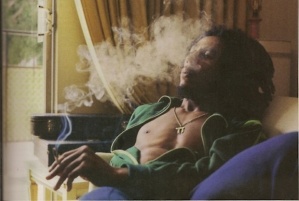 Picture Bob Marley and as well as musician, hes thought of as the biggest fan of cannabis use and peace loving hippy from the Caribbean.

According to this link, Bob’s father was of Jewish descent.   Of course, its generally accepted you are only officially Jewish if its through you mother’s side, but hey that just a rabbinical law….

If like me you grew up liking reggae music, you will notice a lot of the LPs from 1970s have stars of David and Jewish type themes.

This because of the Rastafarian faith is an off shoot of Judaism (using star of David and Lion of the tribe of Judah, and referring to God as “Jah”) and elements of Christianity.    Don’t be fooled though.   This group tells its followers that Ethiopia is Zion and the Messiah is Hillie Sallasie, something that this man, the leader of Ethiopia denies himself of being a deity.   Sallasie is an actual follower of Christ.

In Bob’s final year and with terminal cancer he accepted Christ as his Lord and saviour.

I’d probably disagree that Bob was a believer in 1977.   I have his Babylon by Bus album which was a live concert in 1978.   The record starts off with a prayer in a Rastafarian style.

Here’s another source that shows his death being closer to his 1981 death.

I think its heartwarming that one of the world’s influential musicians found the Lord Jesus, even though he was famous for a different type of lifestyle.   Reggae is hugely popular in Israel and I’d love to know how well his whole story was known there.

I’ll leave you with a Hebrew cover of “redemption song” by Jerusalem violinist and singer Michael Greilsammer.