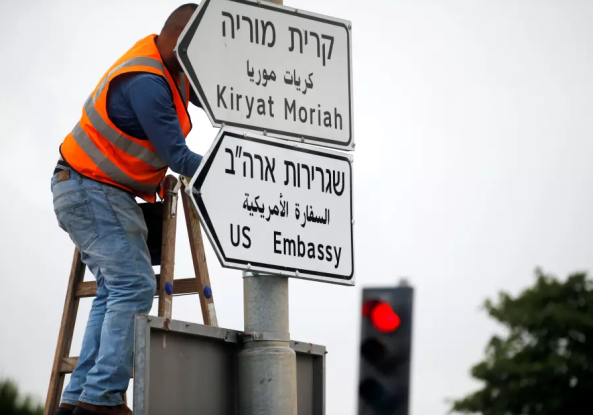 Today is a bank holiday in the UK, so probably more people are watching the news and folks are excited about the signs going up for the forthcoming new US embassy.   This is a good thing, this is a landmark event, as it shows the first of many nations (the US) is making Jerusalem the capital of Israel, and recognition of God’s holy city.

So years ago, when I lived and volunteered in Jerusalem, I saw another sign that excites me.   Its this one.

This is the East part of Jerusalem.   Many people, the Islamic world, and much of the western world which wants to appease the Islamic world think it would be a good idea to make this part of the city into the capital of a Palestine state.   Two issues with this.   Cutting a city in two for capitals of a couple of nations has and would never work.   Look at how that worked out in Berlin for instance.   The other significant issue is that bible believing Jews and Christians believe that Jerusalem should never be divided.    The scriptures warn of catastrophic consequences for any authority that tries to do this.

On the Google Street view, you can spin to the left and see the Mount of Olives or to the right and see the walls of Jerusalem’s old city.

This sign to me show “The last path”  as its the place where Messiah Jesus returns.