A little bit later I will finish writing about the lively church in Nazareth I got to visit.

Meanwhile I took sometime out after flying to see family at Christmas, I wanted to do something different for New Year, the 1st of January is a non-event in Israel, and I am bored with the drinking culture in UK, as Basel is reachable by Easyjet from Luton, UK and I can get back to Tel Aviv via Geneva, I thought it would be a good opportunity to see my good friend Matthew who is a Swiss Christian who was studying Hebrew and going to the same church in Jerusalem, last year.

Railways in Switzerland are probably the best anywhere, this one is a palace in itself with attractive paintings on the walls, escalators and nice shops, and generally an accurate representation of Switzerland’s precise and efficient approach to everything. 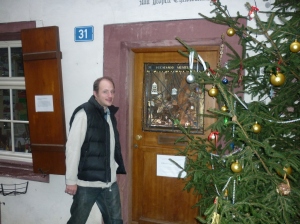 There are lots of museums in this country, this one is meant to be the smallest in the world, I am not sure if its just a window of stuff or if you can go in.   I didn’t get time to visit any of the other ones which was a shame.

Basel is a truly beautiful place.  This was my first visit to Switzerland, so I was really looking forward to it, its quite different from Germany even before I got near any mountains, its like they have a German attitude to efficiency and engineering and use the French and Italian influence for design flair. 🙂 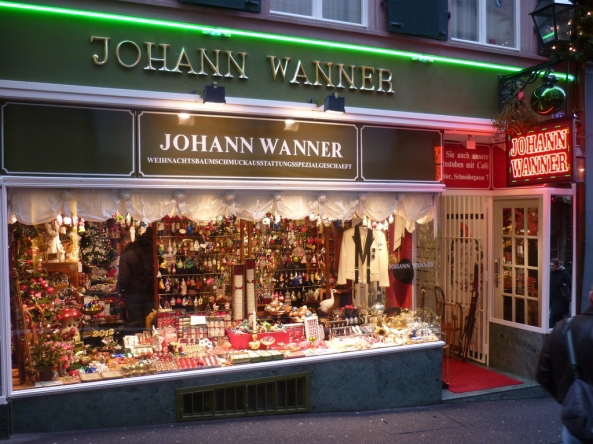 I like the mix of oldy worldy shops and modern retail places too.   Watches are a big thing of course, as top brands in fashion too.  Funny thing is, I didn’t see any places boarded up, so the recession hasn’t affected Basel, or the Swiss are good at quickly dressing up defunkt businesses with different signage, unlike UK and the US! 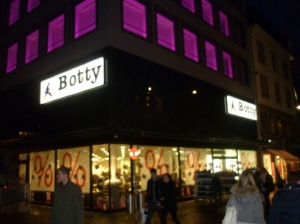 It is kind of horribly expensive, I went to Starbucks and paid CHF7 for the cheapest coffee, (1 Swiss Franc is almost the same as a US Dollar at $0.96)

I got to see my friend speak at a very old (400+ year) church and also another congregation who meet in a plain looking office type building too. 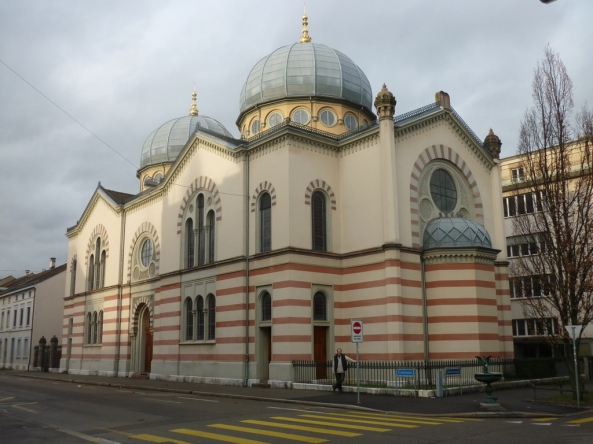 In town I came across a large and big Synagogue, which its own 24 hour security guard.   Normally you can go in there to visit, but it was shut over Christmas (!) as the security office wasn’t manned during the holidays.

My friend drove us to the outskirts of the city to see overhead from a hill.  There is an odd layer of fog over the city which is not that visible from the photo, Basel I think is just above sea level unlike the mountanous parts of Switzerland I visited later.

This was a tall old folly or castle which was about equvilant of a 4 story building, Matthew kind of gets a bit crazy standing up here!  I think contrary to Swiss being supposedly boring running banks and financial institutions, they treated the rugged parts of their country as a playground for skiing, snowboarding and lots of other outdoor sports they like the live dangerously!   and yes, they eat a lot of cheese and chocolate. 🙂

Although this might not seem in regular theme of my blog visiting bible places, this country gave me some interesting perspectives on my spiritual life, which I will explain soon…