This is Southall, a vibrant town I used to drive through often when I had a 1 1/2 – 2 hour drive to the south-west part of London where I was working back in 2016.

Southall has people of predominantly Indian descent.   When I drove through here, as well as Asian supermarkets and takeaways, I saw this funeral business with the religious logos which makes me think partially of multiculturalism in a good way, offering the right choice of care for the deceased.   Sometimes multiple religious symbols are put together like the popular and well-intentioned ‘Coexist’ campaign a few years ago.   I wrote this a while back to explain why Islam, Christianity and Judaism differ.

I drove past this church that intrigued me.

After spending ages in with Google Streetmap view to find the place I was thinking of, I found it!!    The Kings Hall is a Methodist church that’s aimed at this particular community with services in Urdu, Punjabi and Hindi.   But sadly, it is clear that this church from the boarded-up doors that this building is closed permanently.

Often when driving down here, I felt a need to pray for Jesus to be revealed to Indian people in this particular community.   I think the Lord hears and actions our prayers, but we don’t always get to see a result.

I looked up a bit about this church, and found this: http://cinematreasures.org/theaters/31352 it was originally designed as a cinema and shutdown as a church in 2013.

Looks like someone stuck this label on to continue the gospel to this precious community.

Last week, I went to a small home group of a friend’s church which meets not far from this area.   To my joy, I was told by two Indian Punjabi former Sikh now-Christian couples that there has been a revival in the last ten years in both North Indian in the Punjabi region but here amongst Indians in Southall finding Christ!!

It’s such a blessing to see the Lord’s faithfulness in the gospel happen often in the background scenes. 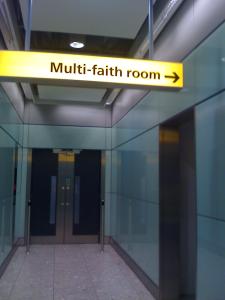 Just reading a friend Jon B’s visit to Turkey on Islamic culture, reminds me of something.  At Heathrow airport I had a long wait for my flight, and I saw a sign about a multifaith room, a kind of politically correct euphemism for a one size fits all church for any faith.

There is a church in at least one of the hospitals in Portsmouth, there is also a multi faith centre in the recently built £40m Lymington hospital in the New Forest I worked at sometimes about 18 months ago, when I visited this, I was pleased to see judging by the literature put out it was mostly had Christian books and bibles there. 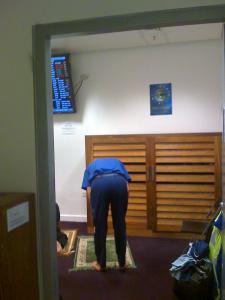 Here is this one in the shiny new and hopefully post-problematic Heathrow Terminal 5, is one of these places, so I decided to take a look, as there’s only so long you can spend reading books and magazines you aren’t going to buy in WH Smiths. 🙂

Firstly apologies to the chap bending over, it was hard to get a quickie shot of this place without appearing to be disrespectful. 🙂  When I went in there and first of all unlike any religious establishment there is no symbol on the wall of any deity, or any centre point to make the room significant apart from the screen reminding passengers of upcoming departures.  There is a wooden cabinets with labels for Christian, Jewish, Muslim, Hindu, Sikh and other holy books.  There are signs asking people to be respectful and not use it as a place to sleep or do baby changing.  The place also smells like a gym changing room as people take their shoes off at the door.   I didn’t bother at first, but there were five Islamic worshippers here at one point and one of the pointed out I should do the same to be respectful so I likewise decided to comply.

Out of the ten people I saw that went in and out of this place nine of them were Muslim, each borrowing a prayer mat from the cupboard, at least two of them were employees of the airport, one was an Indian gent (I think Hindu) with a piece of rope being held in both hands.   With some praying aloud in Arabic, it was a little hard to concentrate when I was reading a bible at one point, but it got me thinking.  There was a message from a Chaplin about that people should ask permission before leaving any literature in the cabinet to avoid causing offence.  I am not sure if the Chaplin has a sit-on-the-fence attitude to the Christian God to try and ‘not offend’,  just a general admin bod employed to keep the places clean and tidy, or someone with a real zeal and love for Christ but wants to be a servant to people not following the Lord.

Where as we could get alarmed at the number of worshippers of faiths other than Christianity being practised in the UK changes our culture, (and oh how the BNP and similar fascist groups and their ilk love to rub this in) but how many of us Christians actually make the effort to go to one of these places and maybe spend time in prayer before a journey or silently pray for the other users of the room for them to find the loving acceptance of Jesus?  Maybe if we did we would have very different faith landscape in the UK.

If anyone in church leadership is reading this, I would like to know what you think.  Is it a spiritually difficult to pray in a room with people with other beliefs or is worshipping Jesus here could be a good way to pray for others, or are these rooms pointless.  Those of you who are Christians travelling to other lands blogging on airport things too.  Please let me know your comments.

few oddball pictures from Spain that deserved their own mention: 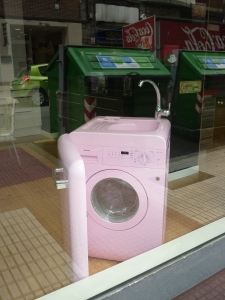 I really want to do this!  the bubbles were 2 metres long.   Going to try and head to Ben Yehuda Street back in Jerusalem, where street entertainers often gather and give this a try and maybe make a bit of cash… 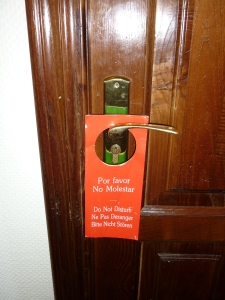 This just means do not disturb on my hotel door, but the translation just sounds so wrong!!!! 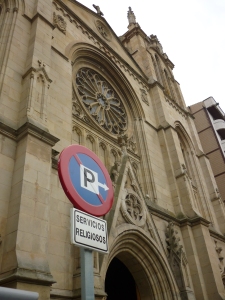 No parking outside the church unless you are religious.  I think.   A bit later there were a couple of hearses outside though.

On Sunday morning went to my usual church then went out for lunch, usual quite relaxing day.  The talk in the morning was part of a series on distractions which is something that causes more problems with things for me than I can think of.

In the evening I went to the Isambard Kingdom Brunel pub (a Wetherspoons pub named after the famous industrial engineer who lived in my city of Portsmouth, UK) and met up with Mark Rodel reverend of another church in Portsmouth who has a blog and in addition to running his own church likes to meet up with anyone in this pub most Sunday evenings for a chance to relax and have a beer and chat to another small crowd.   Something different from regular church or cell group, (which is a mid-week church meeting someone’s house in a informal closer knit group for regular church people) but this is different as provides a chance for people with casual questions about Christianity and church in a familiar public environment.

For me I think many Christians don’t always visualise the fact church can seem very scary place for many people that have never been before to church, have fallen away, or are just plain shy, and this is a good place to get to know people and get questions answered on many things on church life.  Jesus spent a lot of time in public places speaking, so its only natural that fellow believers could sometimes get together in a place most people are familiar with and invite people to come and chat about whatever they wish.  Mark uses a few unusual visual cues to illustrate things from the bible and this week he got us to make some paper boats to float on a washing up bowl of water he borrowed from the bar.

Anyway there was just about 7 of us from different churches around the city, it was nice getting to know different people from quite a few backgrounds.   Will try come along semi regularly while I am still here in the UK.