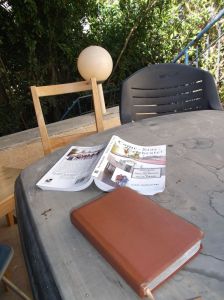 During my two week break in Israel, I got the opportunity to relax on my friend’s balcony and read this book I got a few weeks ago. 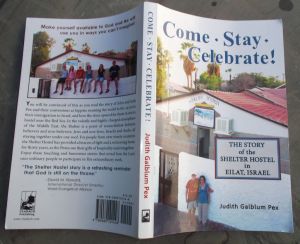 It took me a long time to find this book in the UK, eventually, it resurfaced on Amazon UK after being out of stock for a while.

The story of John Pex a Dutchman and his wife Judy who is an American Jew traveled around as hippies and found Jesus and later founded a hostel in Eilat, the far-off obscure city at the very bottom of Israel past 5 hours of desert, which as Judy puts in, is to Israel what Alaska and Hawaii is to the US.

The Pexes are really some of the most pioneering members of the modern Messianic Jewish community of Israel.   As well bring Jewish and Arab people to the Lord, they have shared the gospel to African immigrants and to construction workers from Romania and China that built the modern hotels that have transformed Eilat into a busy Red Sea resort for vacationers.  A few people who accepted Jesus in the book I now recognise as leaders of congregations now.

The hostel itself has a welcoming atmosphere and bunk rooms, and an outside seating area, on Fridays they do a Shabbat service with food, and praise and worship in English Hebrew, Spanish and Russian songs.

I’ve stayed here twice now and love this place and the people there.  Regardless if you are Jewish, Christian or not at all religious but visiting this city especially if you are about to pop over to Egypt or Jordan which are so close by, I would highly recommend this place.

If you have stayed here, or would just love to hear how the gospel has been brought to Jewish people in Israel so effectively I would get this book.   I would recommend to the authors if you can find more places to stock this book, it would be better if I could buy it from a retailer in Israel run by believers 🙂

The outside lounge under a Sukka type structure with a palm trunk, is a great place to make new friends and discuss travel stories. I visited here in 2009

I was in Eilat a few weeks ago, Israel’s most southern corner and at the top of the Red Sea.

Having a teeny little airport which I think only offers flights from Tel Aviv, or drive or get a bus from the rest of country via a 300km road from Jerusalem, it is quite remote, with only Beer Sheva and a few other places in between.

Being far away and with not much employment outside of tourism, Eilat is a bit like the Isle of Wight of Israel.

I thought of an interesting idea, Israel maybe a hi-tech development nation, but its very lacking in online retailing.   As an IT person, its not so easy to go online and buy something and have it in a couple of days like you would have in the UK or US, ok part of this is due to fact this is a small country, but it is a bit inconvenient to purchase a urgently needed specialised computer part, or even a DVD easily online in Israel.

In the UK, if you buy something from Amazon.co.uk, if bought from Amazon’s own stock and not one of their third party sellers, usually your stuff gets shipped from the Channel Islands (to my non-UK friends that’s Jersey or Guernsey, part of the UK but close to France) due to the fact that goods there are VAT free, Play.com, CDwow and even Tesco’s online retailing do this too.

I am not sure how Amazon’s US operations are, but think some of the states offer no sales tax.   One of my friends from Switzerland buys his DVDs from Amazon.de much cheaper than the Swiss high street.

Eilat is also a bit unique as the retail outlets, mostly clothing are all VAT-free to encourage tourism and provide jobs there.

Something else I have noticed, and not seen this mentioned anywhere online, is that the post Office in Israel is very cheap.  I think the British Royal Mail have put the prices up by a record 25%, I estimate sending mail (packages of less than 2 kilos) is about a third of the cost of it is domestically and overseas than it is of the UK.

I salvaged the parts of a broken laptop and it cost 28 Shekels (less than £5) to mail the LCD screen (box weighed about 1.3 Kilos) I sold on eBay a couple of weeks ago from Jerusalem to Italy. 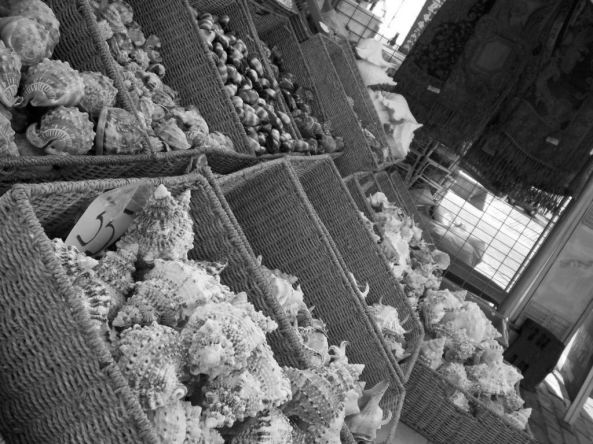 Israel could do well and provide jobs to people in Eilat, by making it a central distribution hub to ship items locally and worldwide on the internet, and give people super value for money shopping.

Someone needs to put together a online shop template that works in Hebrew, English, Arabic and Russian and maybe more languages, so the business owner can set up and sell his stuff with minimal technical know-how and maintenance of the site apart from his stock.

Today’s online retailing in the western world means a lot of dropshipping is done, as the person selling the goods and providing customer service doesn’t have to be the same place as where the stuff is dispatched from.  I have bought a few things of small value from UK, Germany, US and China, needed for my job in Israel online, and only need to pay import duty on one item which was 100 Euros (£80)

Israel needs to continue to grow to support its expanding population (5-10 children is common) so by building economy at the bottom corner of the country makes a lot of sense, especially as David Ben Gurion was a firm believer in building in the desert.

Jellyfish I think are the weirdest of God’s creatures ever.

They aren’t fish, they some completely different genus from shellfish, their transparent gloop-like elasticy of their bodies make them completely unique.

There is no skeleton or rigid structural parts to their bodies, nor do they have any obvious things like eyes and mouth.   The four ‘gland’ type things I can see I wonder is their brain, breathing, reproductive and digestion components?

These ones are everywhere in Eilat, in the top of Red Sea, and they are purply colour.   This adult one is about ten inches across, like a typical sized dinner plate.

Apparently they do sting, but very mildly like a slightly unpleasant rash.    These ones are more like inverted flowers rather than the long decorative tentacle draped lampshade-like ones people think of has been exotic and deadly.

Anyone who knows me well, knows I can’t swim.   This is always and awkward subject, as people look in astonishment and tell me its “easy” and ‘I came 1st in XYZ swimming competitions… blah blah…..”    Geez thanks people.   Shall I go up to a disabled person and laugh and say “haha!! you can’t walk!!”

I had a fear of drowning as a child, combined with the evil swimming teacher woman from hell circa 1985 when I was about 9, in addition to not seeing now how my average 5’10” frame can propel in the surface of the sea without me getting into a panic of inhaling water.   Yes – I have tried.  But prefer to admire the sea no deeper than my knees which suits me fine.

Before I got to see the incredible exotic fish here which rival the sort you would expect from being in the Caribbean or a Pacific Island, I didn’t get to visit the Marine aquarium this time, but the Jellyfish and serene stripey and mauve fish that are a complete world away from fish you see in Southern England are a real treat to see.

This was our driver who took us from Jerusalem to Eilat, a fairly punishing 311Km trip all the way down the Negev desert to the very south point of the country.   And I do mean a ‘point’ as that’s exactly the bottom shame of Israel’s Red Sea city tightly between Egypt and Jordan.

There is something a little unconventional about this driver’s uniform.

Stopping at a petrol station for a bathroom stop, (4 and 3/4 hours, no toilet on the bus)  made me think we were in the Nevada desert rather in the holy land.

Actually judging by his accent, this gent was a regular Sabra Israeli, ie: not an immigrant from anywhere else.  I think he likes his job as a cowboy driver across the desert.

To be honest, as we alotted seating, I was on the very back seat in the middle which is not so good for seeing scenery, it was full so there was no chance of moving later.

Actually this man reminds me of another driver, this time of a well known black GMC van.

Mr T became a Christian back before the A-Team, there is a good article here.

Athough not in the newest A-Team movie, he hasn’t aged that much, and as he is a leadership position in his current church, I think it would be good if he could lead Christian groups to Israel and hire the above chap as the tour bus driver!

I can just picture this; “I pity the fool, who follows BDS!!”  if you want to obey God, you need to pray and support Israel Sucka!!!

I went with some folks from work to Mini Israel a place with lots of models of famous sites in this country.

Downtown Tel Aviv.  Here there is a street with moving Scaletrix style cars and trucks that go up and down.  A lot of the trucks having recognisable brands such as the blue, green and red one being Tvuna, Israel’s largest dairy.

You do actually feel a bit like the oversized main character of a B movie walking along very detailed places here!

This tourist place is a kind of Israel’s “greatest hits album” as its a way seeing a hundred odd places in one location, and a good way of seeing a glimpse of places you have yet to visit, everywhere from Mount Hermon to Eilat. 🙂

Capernhuam next to the Galilee, one of the places Jesus preached.   I also went to the real one in May.   Will write on this soon. 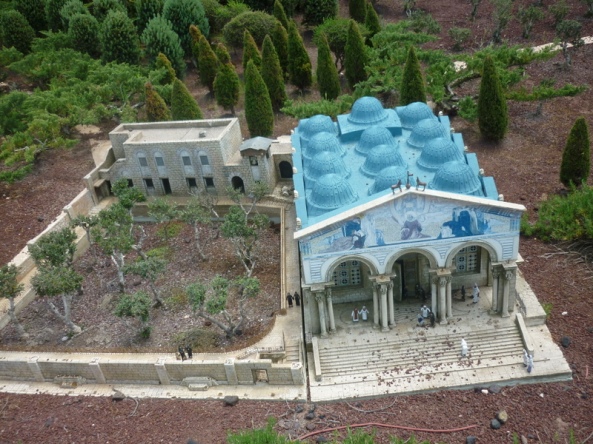 Here is the Garden of Gethsemane in Jerusalem. 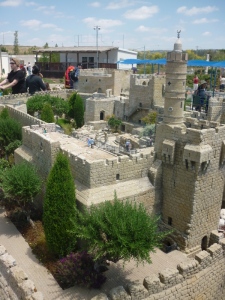 Tel Aviv water front.  Looks great but is there a model of the Zohan? 🙂

Here is Jaffa too. 🙂

The attention to detail on the models is excellent.  There are small background noises put in, such as traffic, crowds etc.   Only trouble is maintaining this stuff must be a full type job as the hot temperatures and dust has caused some of the models to crack in places, so regular repair is often needed.   There are a lot of places miniaturized, not just religious sites but even Coca Cola factory and people working a Kibbutz.

This was a nice day out, although some scary experiences on the way home…..