There are active volcanoes in Iceland bigger than the one that went off at the beginning of 2010 which paralyzed Europe’s air traffic, this below article says there is signs of activity:

I have been interested in volcanoes since a child, and I visited Iceland in 2005, a country formed by friction between North American and European plates of the earth’s crust.

Read this Wiki article on Katla – from this article; “Following the 2010 Eyjafjallajökull eruptions, on 20 April 2010 Icelandic President Ólafur Grímsson said “the time for Katla to erupt is coming close … we have prepared … it is high time for European governments and airline authorities all over Europe and the world to start planning for the eventual Katla eruption”.

This other live volcano called Laki is more serious.

It has killed 23,000 people in the UK, and possibly SIX MILLION in total in 1783-84!  Given the destructive potential of a volcano, not just from lava flowing and melting a town but also poisonous sulphuric gases causing death to humans and livestock and ultimately a famine.

If you are interested in geology and its potential risks to urban areas, Google Earth is a good tool to study patterns of volcanos around the world, and the tectonic plates that seperate continents, you can use the tick boxes to turn on places with volcanic activity. 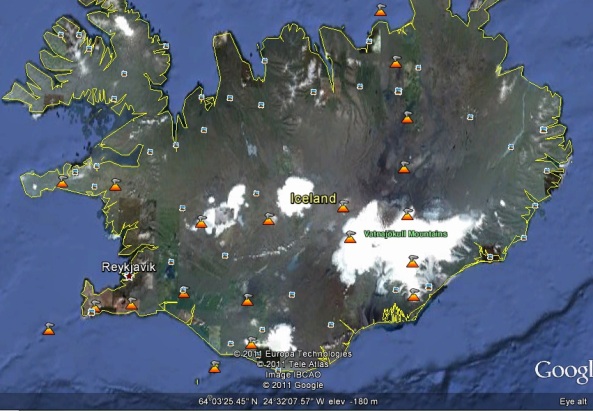 Back here in Biblical lands, there is a huge live one close by in Syria, and its called Es-Safa.

In contrast, part of the Golan Heights in between Israel and Syria, is also volcanic, its exact state unknown but probably not erupted in several thousand years.  There is one more probably live one near the Turkish border which doesn’t have a name.   This makes me think Syria doesn’t have very many geologists I reckon! 🙂 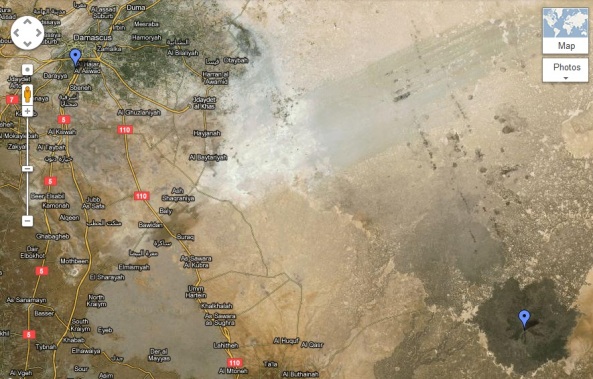 (Click above to take you directly into Google Maps)

Es-Safa looks quite significant by its obvious brown crater visible from space though!

By some measuring I have done here, Damascus is less than 100km from this vast looking dark hole, the bible says Damascus will be destroyed one day (heap of ruins Isaiah 17 : 1-3) so maybe it won’t be by war!

To me its phenomenonal to think the most destructive forces in the world are not always man made like nuclear bombs but something natural hidden under the ground, having said that, when I was in Iceland, I got to hear an amazing story about the lava from a volcano stopped dead in front of the gates of a church as the congregation inside prayed to Jesus for safety.   You can see evidence of this there today.