The scenery abruptly disappeared into a tunnel and then there were two more stops until I could get to the summit of the 3’500 metre Jungfrau, its the highest mountain in Europe, actually there are mountains that 4’000+ its just this one you can visit publicly without any climbing equipment.

The two short stops are more like the halts you get when a train stops at a signal, we got out each stop for about five minutes and there is a glass window in the tunnel where you can see over at the mountains, I didn’t get any pictures of this, as the glass was dirty and pictures wouldn’t look that great.

Having a station inside the mountain is great!!  its like a evil empire headquarters from a movie, there is a complex collection of tunnels that get you to varied different sights here…

Outside on this side is the ‘Sphynx’ a seperate peak with its weather station and outside platform – I guess the shape of the cliff face is a tiny bit similar to the Egypt statues of the same name. 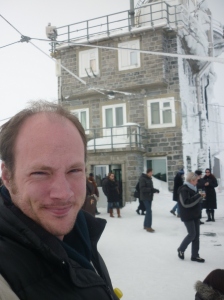 Out here is a weather station, and the main look out post, which you can see….   er, not a lot.  sky, clouds and snow, and not a lot to differentiate them.

When I came back to this part a little bit later you can now make out the valley tha’ts in between the different peaks.

Some very pleasant white Swiss chocolate against the mountain backdrop.  No, this isn’t some crossword or soduko game, there is a long drop below the metal grid platform I was standing on, which has partially filled up with snow.

Above is facing the other direction, here more exposed to the elements, the weather is something in the region of 16 degrees below zero.

There is a lift that takes you between the middle of the complex, I think its roughly the vertical distance of 10 storey building which takes you to the shops and restaurants.   There is a film where you can watch the history of this place and how the line was built, but I was disappointed I wasn’t able to see this at was booked for group. 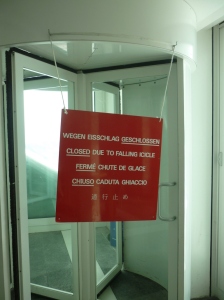 ‘Falling icicle’  seems to be a translation error I think!  this view is closed because of an avalanche hence the mass behind the revolving door!   The ice art show, the corridors of this maze like walkway are made of polished ice, just like various statues inside…

Later on, I headed back towards Interlaken, actually mistakenly taking a slightly different route back. 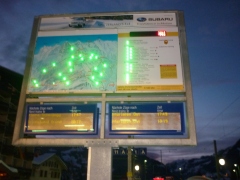 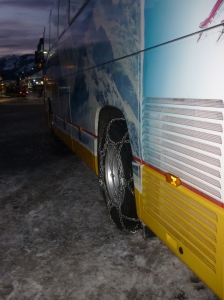 Actually this was a pleasant discovery, this small town, I am not sure of the name of, is so charming even the bus stop has a wooden chalet to wait in.   The buses look suitably robust enough to deal with the snow with these chains.

The sign above gives visitors to the slopes a heads up of the weather conditions and what is safe to visit.

Was this worth the money?   probably not, it was great to say I can visited the highest publicly accessible peak in Europe, but due to the huge cost of getting there, and several of the promised places were shut (not just weather but engineering works)   but I am glad I got to do this journey.

Getting back to the magnificent Basel railway station, I was looking forward to this train which was taking me to Interlaken, a small town of just 5’000 ** in the middle of the country.  Having high homes that this ride would meet up to the high standards that Switzerland is famous for, I was a bit shocked that train was made of 45% standard carriages and 45% first class, this meant there was hardly any people traveling in the highest class seats, and not enough seats for regular passengers, this left a lot of people standing up and lot of large cases and ski equipment in the corridors.   In someways I wished I left earlier as it would of been nice to get see some scenery out of the train windows.

<<** the Swiss like to use slightly different grammatical symbols than the rest of Europe!>>

The remaining section in the middle of the train was the dining car and kitchen, so I snagged one of the last seats there and got a tea from the counter there.

After a couple of hours, I arrived in Interlaken, it was dark by then, and really difficult to figure out the terrain, just some ghostly black shapes in the sky which I found out the next day were mountains.

This hostel is great!  It takes its name from Eric Balmer who is something of a local maverick and entrepreneur in getting Interlaken one of the most famous hostels in the country and an adventure capital, this attractive traditional wood style building has everything needed to be a base point for a big adventure in the Alps.   Mr Balmer’s face appears on lots of pictures around the hostel showing him meeting famous people.   The hostel is made of 3 separate buildings with the main hotel and a (presumably purchased later)  annex with more rooms and big dinning area, there’s also a basement bar and dancehall under where I am standing, but it seems nice and quiet in the rooms which is good. 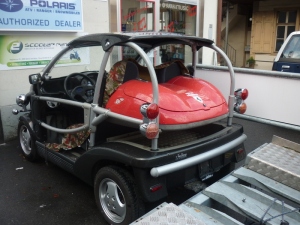 Interlaken is quite an apt name, as its between two different lakes.   As a small quiet town its nice when you go walking, everyone you meet will say “Gruezi!” (a Swiss type of greeting I am not sure of meaning but not used by Germans I think)

The town looks efficient, neat and orderly like everything Swiss, but make no mistake, this is not a boring place!   As well being a gateway to the mountains for skiing and snowboarding, there is also loads of other outdoor sports, a rental shop for ski hire is just a couple of doors away from the hostel, and these little cars can be hired from another place across the road.  If you take a close look, the yellow ferrari ‘prancing horse’ is actually a Swiss cow standing on its back legs!

As well as these logs stacked by the side of the ride, and the unmistakable charming style Swiss wooden houses, everyone seems to have a shed to store plenty of firewood for the harsh winters here.

I was pleasantly surprised that the local churches make the effort to advertise themselves to foreigners visiting Interlaken, but I wasn’t around to visit this place. 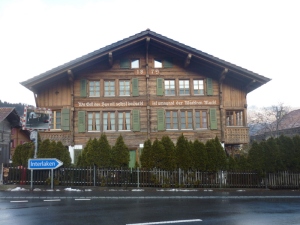 This wooden house (I think its a school) has a biblical message painted onto the timbers.  Its nice that Christianity seems part of the fabric of the community for a long time and still today.

Of course, Interlaken is completely surrounded by mountains.   These snow dusted mammoths are all around.   Not only that, but the ones in immediate view have ones behind exponentially larger, requires some specialised transport to get there.   As well, the whiter peaks blend in with the sky and clouds in an incredible way.

I found the vast beauty of the mountains show God’s work as something thats hard to comprehend from the ground, let alone see it from a web site, post card or brochure.   This is a place thats impacted my spiritual life like Israel has.

Next, train to the highest peak in Europe...