Theres been a lot in the news lately about the Christ at the Checkpoint event, a collection of Christians that are critics of Israel, and worryingly some that also involved with extremist Islam, and invited some leaders from a few local congregations to make the event look ‘balanced’  – I have seen a brief bit of one the videos and I think there was some good things spoken by one of leaders of a congregation in Jerusalem I go to, but not really convinced there was a fair representation.

Is there way to bring Jesus to bring reconciliation to Jew and Arab, yes definitely!   but I will look forward to some other event I think.

Whilst this event was on, I spent three days out of town at the event in Tel Aviv, as this year I went to the FIRST Robotics event that was being held there in a sports stadium.

This event gets youth into competing in using their engineering and electronics know-how, as well as a whole host skills; team work, budgeting, piloting their machines as well as approaching hi-tech companies in Israel for sponsorship. 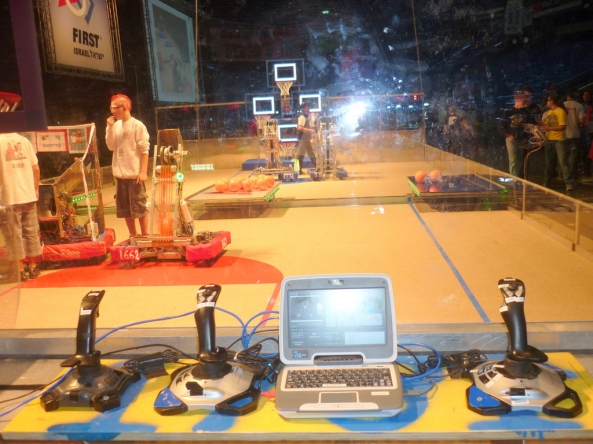 I didn’t manage to get many pictures this time, but can see more from my writings I did last year, here.

The teams included religious Jews, secular Jews, visiting American Christians, local Arabs, soldiers from the IDF and all girl teams too, (theres a lot of women in IT and engineering here compared to the UK)  it just so happened to have a great atmosphere and a mixture of different people groups here.  There was no mention at all of any politics whatsoever at this event.  and it felt that it wasn’t a contrived effort to make peace as anyone is invited to take part.

I was at this event as part of a project Bridges for Peace does to get involved with community work, I was just sitting up the balls on the pitch after each game session, I suppose a bit like the chap with white gloves who sets the balls up on snooker on the telly!  It was a fun event although it was a 12 hour day for us, as well as three days to set everything up before the games started.

Robotics are used a lot by the Israeli army for bomb disposal and drones to take pictures of a hostile area to relay back to a base, and the FIRST Robotics events have been happening for 20 years now in the US and Israel.

I think its very exciting that these events can take place to bolster the reputation of Israel as the ‘Silicon Wadi’ and provide a fertile environment for new talent in technology and engineering.

When I was a child, I had this dream where I was in a playground and all the other children had run off out of the school, I wasn’t sure what they worried about, I turn around and there is an evil robot coming towards me.  It was a weird nightmare I had a few times…

Today I decided to take a ride around my neighbourhood of East Talpiyot in other direction away from Jerusalem city centre.  I head to a convenience store and get a bottle of Fanta and ride back along the main road, towards the food bank which I work there typically one day a week. Anyway I am riding my bike across a junction where there are some traffic lights and I see a policeman stopping a coach and talking to the driver, he doesn’t see me and I ride past him, in the corner of my eye there is a policewoman and a police Ford Focus stopped diagonally at the traffic…    Then someone yells at me STOP three times….  At the same time I hit the brakes when I see what is ahead of me…

If you can’t see anything, look closer at the taller white railings.  There is a garbage bin with usual piles of old clothes spilling out like I see on most street corners and about 15 metres ahead is a bomb disposal robot with caterpillar tracks and a single arm is analysing the piles of clothes…. I turn around and head to the opposite side of the road, the police don’t seem to be cross that I didn’t notice this road block.

I get some pictures.   The robot is partially concealed by the barriers in the road.

Apart from my childhood nightmare turning into a reality, this experience didn’t worry me too much, there are all kinds of circumstances where items abandoned in odd places start a security concern and procedures have to done to see if there is a genuine threat.   Its just I often see piles of rubbish falling out in bins like this. I talk briefly to two men sitting on a bench, its seems quite funny.   I take a detour to another street to go south towards out of Talpiyot.

Another 5kms or so down the road, and this is a nice view of a very new housing estate, my maps tell me this is called Homat Shmuel. A little bit further and now I am completely out Jerusalem and I can see the border with the West Bank.

Border controls.  I take a U turn and head back on the main road. 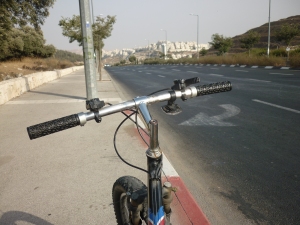 This sign seems interesting.  This is pointing the another biblical place, seemingly named after a king who was famous for killing babies.  This adventure is for another day as I have no water left and ought to get back.

Just before going home, I did see these ruins which look Roman looking, from standing in Derech Hevron Street.

You have probably heard of lemons being used to run simple digital watches back in 1980s, fun but probably no real life use for citrus fruits as means to run gadgets.

But today in seems vegetables have uses instead, this time for lighting (LED technologies have massively get better in last couple of years)

Perfect for developing nations where batteries are scarce and expensive, not to mention poisonous at the end of the lifespan, and yes its those darned clever Israelis again that came up with the idea of using the humble spud.

The article doesn’t say when your potatoes need to be changed, or if when they grow shoots if that affects their performance though.  Imagine this conversation one day:  “Hello, yeah, er I can I call you back in a couple of hours, phone battery is dying and I need to get a kilo of King Edwards from the market, speak at 9pm mate, bye”