Work has been busy this week, actually I am not often not busy, but had some trouble with a PC that sits in the Talpiyot food bank that is supposed to back up everything off servers, this essential running box was showed as off on my Spiceworks console, and after I went over and replaced the power supply, the next day it did it again.  The PC had to be replaced and took good few hours to get it running the same.

Talking of such, its been very very hot in Jerusalem, temperatures have been up to 37c (thats 100F)  so cycling 4 miles to the office in scorching heat is pretty tiring!

Other things I had to do with to set up new members of staff, get a Russian speaking colleague who is based in Karmiel access to a database, he works with immigrants from Russia and ex-Soviet states who live in the north.

But as well as this I managed to put a new screen in a friend’s (ie: not one my work’s assets) laptop.  This Acer Travelmate laptop had liquid that got in the LCD from an accident with some olive oil, great for your health but not for laptops, the screen works just has some weird blobs in between the layers of thin plastic inside the screen, this would eventually cause the LCD to fail altogether as they are fragile.   When I went back to the UK I ordered a new LCD display and carried it in a box on the plane, so I was a little nervous that this part was all right, it cost me UK£70 ($100) from a specialist laptop spares company in the UK….

Out come the little rubber pads on the screen fascia.  Then take out all four screws.  Gently prise and flex the screen fascia out, the old LCD is freed from taking out 4 tiny screws from the long steel hinges that give the top section rigidity and also double up as antennae for the wireless card, then the screen can put flat down has the ribbon cable disconnected and two little wires from the inverter that supplies voltage to the screen.  The new screen is put in its place and I put the screws in loosely and tighten them up one at a time, as it needs to be jiggled a bit into place…. 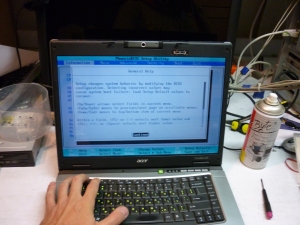 Hooray it works!!!  The volunteer who asked me to fix this gave me a bit of extra money which paid for my Dead Sea trip before I went away, so it was a blessing I could get this fixed for her, and she could provide me with means to do some exploring I did with friends at a weekend a month ago.

The IT workshop has three desks and half a dozen PCs as this room has our database expert (Gilad) sat here, we also had Shirley our American-Chinese IT specialist who took care of a lot of problems at this site, but she has left now (we miss you, come back soon!!) and there is a bench with lot of stuff in pieces to be rebuilt and put back into service.  At my main desk in headquarters I just have one PC and few spare parts and a server room I look after…

There is another Acer on the pile of PCs in the background, this has a full hard disk and need some software tweaking to fix it. (change data around the two partitions on it)   I am going to order a new power supply for this as the one the volunteer as its a bit unreliable and held together with tape.

The food bank floor team are having a bit of cake and ice cream after lunch (why I look forward to site visits there)  but don’t let this deceive you, this team work very hard hauling food onto pallets, several tons a day that are shipped to some of the most poorest and needy Jewish people in Jerusalem.  People do come and go fairly often, as people come to the end of their commitment is always sad.   Here you can see these pictures shows staff ranges from the US, South Africa, Japan and Finland.   We have had people here from every continent.

Overall this week has been extra busy, but got most things done I needed to do and it has been fun.