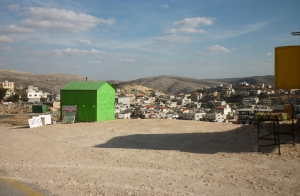 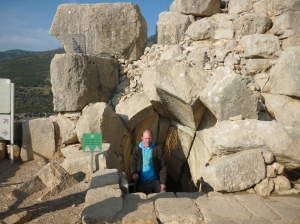 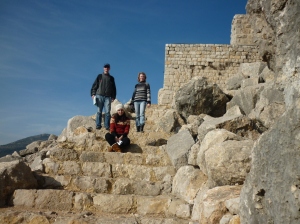 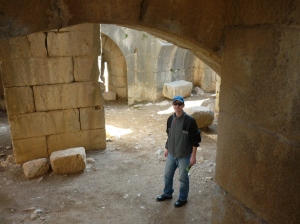 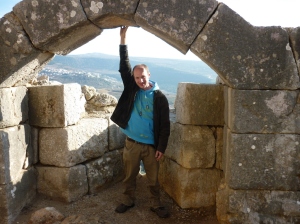 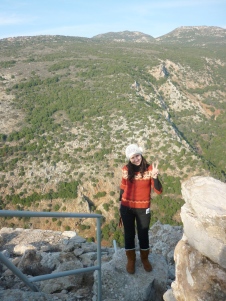 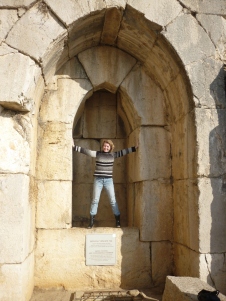 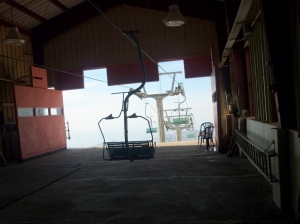 The ski lift was good fun, I don’t think I have been on one of these before.   I have never been skiing in my life, and despite snow, there isn’t enough to justify a proper skiing season at the moment, even if there were, without sounding like a total wuss, my travel insurance doesn’t cover skiing I don’t think.   Only one of the 4 ski lifts was running, its more of case its fun to come up here and see some scenery that’s very different from the rest of the middle east. 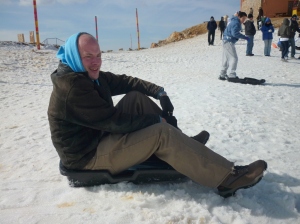 These plastic sledges can be rented from a small shed, but they feel extremely cheaply made, they are highly thin, like the plastic used to make ice cream tubs, and some stress lines I saw in the middle, felt it wasn’t going to last very long, still it was fun to propel down the this short hill.   There was an official looking steward to stop people colliding into each other, and make sure they walk around the side back up the top. 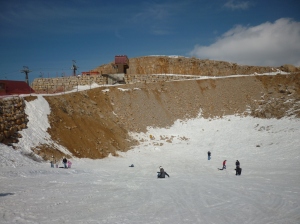 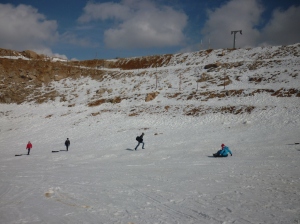 Also at the top was border control.  There is a DMZ (demilitarised zone) in between Syria and Lebanon up here, ie: a gap of land between the borders.   Said a quick hello to the soldiers and asked if it was ok to take pictures. 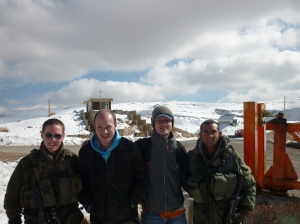 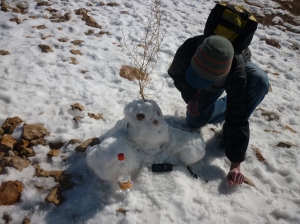 Dave decided to build a snowman, and felt that he should have hands free access to a phone 🙂 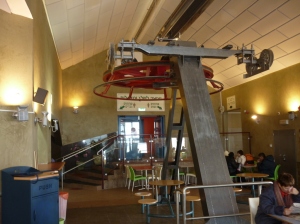 The cafe has an extra redundant piece of the machinery that operates the ski lift in the cafe as decoration.  It was nice and warm in this cafe, and got some great views from the top of Hermon. 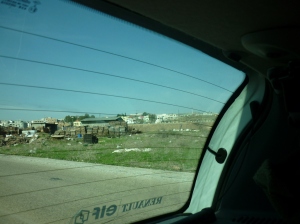 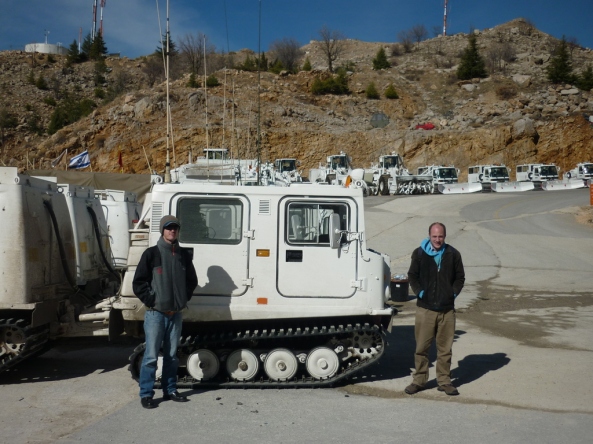 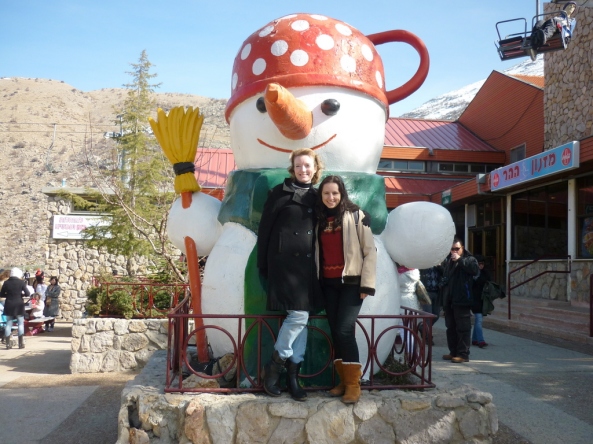 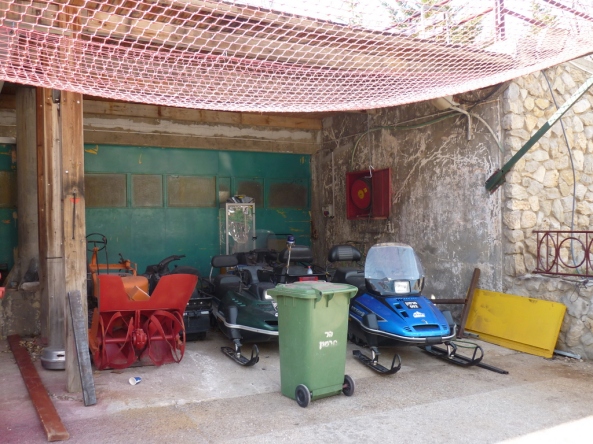 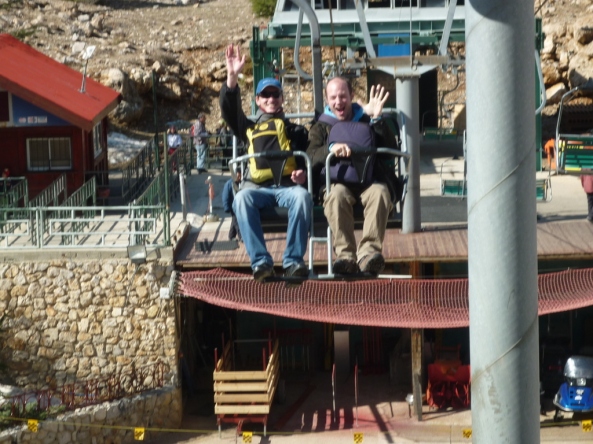 On Sunday I got up very early to meet with friends to get to the snow capped Mount Hermon.

This place is not so well known by non-Israelis, as its at the very extreme north east corner of country, where the borders are for Lebanon and Syria.

After a not so pleasant start of my phone waking me up at 4am, necessary given the time to get up there, after teetering around my flat to get things together and have breakfast without waking up other room mates, strangely probably because of the weather is quite cold also at this time, I decided to do a fast sprint for no real reason on my bike out of East Tapliyot all the way through central Jerusalem all the way up Jaffa Street to the main Jerusalem Bus Station only took just over 30 minutes, quite amazing consider how slow I normally pedal. 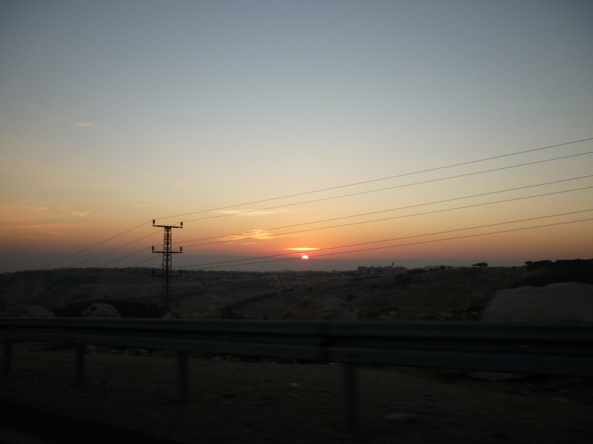 Once off the bus close to Rachel’s house, the sun was just coming up.   This trip came at a good time seeing I was disappointing in not seeing my dad up here and was also concerned about a lot of choices I have to make this year, so this excursion was a welcome change, one of a lot of blessings this week actually, getting over a stupid week-long cold another one, and also once at the bus station finding a coffee shop that was open there was another one.  I was just about to text my friend Dave to see if he was close and he was suddenly in the shop in front of me. 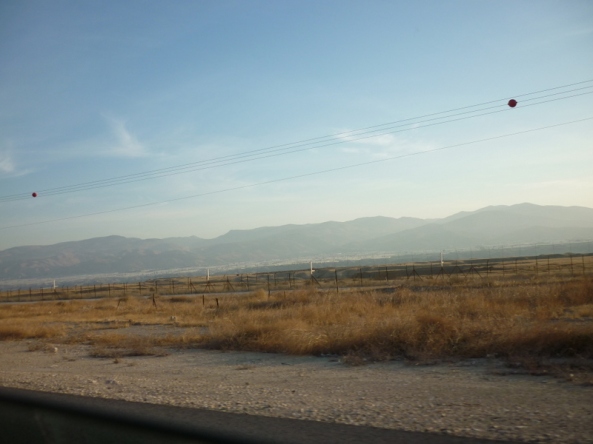 The drive up there is different from previous drives up north I have done.  It involved going back on ourselves to head down towards a bit of the Dead Sea, then up from the West Bank, on a main road that passes through some Palestinian towns, at times running parallel with the Jordanian border as this above picture shows. 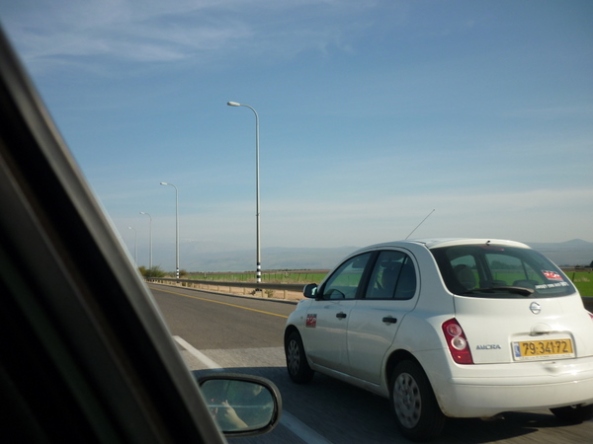 As we overtake this Nissan Micra on the motorway, if you look really really carefully on the horizon you can see a faintly see Hermon.  Once you get as far as Tiberias, the white peaks on it start to become prominent. 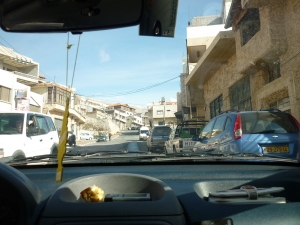 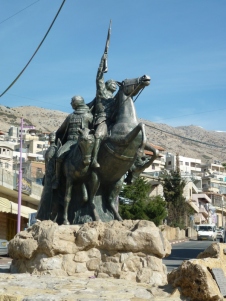 This drive through a small but friendly Arab village up in the Galilee, we got some directions as we kept going higher and higher.  This town had a couple of interesting bronze statues that looked more like something from native American history I have seen in Arizona that from a Galilee Arab community.