Another one of these Jew/Arab meet ups happened again this month in Cyprus.   From someone uninformed what could be better than Messianic Jews and Palestinian Christians get together for reconciliation and understanding they don’t agree on everything?

But, what happens which such event, only offers peace on one their own terms and uses manipulation of the other?

One of the Palestinian Christian leaders is a guy called Sami Awad, who was part of a group called “Zen Peacemakers”

According to a quick look up on Facebook, Zen Peacemakers is actually a Buddhist group.

Sorry, but peace only happens when you have real relationship with Jesus Christ as Lord and Saviour. 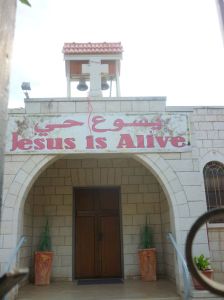 This is a great Arabic speaking church in Nazareth I went to – completely full when I went, not enough seats, some standing! Also had English translation using radio headset.

I’ve seen some meet ups between Jewish and Arab believers in the holy land, I find it hugely heartwarming when it happens.   It seems to be easier to create peace in Galilee communities which Jews and Arab live quite close together.

In the four years I live in Israel I had Arab believers in my church and in other congregations I have visited.

I know in Bethlehem there are Arab believers that part of Steve Kory’s church who work together with their Israeli neighbours, and various home churches which operate discretely.  For Christians in the West looking into side with, these are some of your best bets for strengthening the body in these difficult places.

Until then, some of these fake peace groups are as about as convincing as McDonalds trying to combat child obesity.

Really good article that explains about Palestinian Christians and Israel