On the away trip with the staff of the charity I volunteer for, we first stopped off at Caesarea.

I have blogged on this place before but only very briefly, really only touching on the theatre which hosts live music and TV shows today, this time I got to see this place in a bit more detail.

The museum park is mostly outdoors and is a beautiful place to visit.  It is probably the most important piece of Roman history in the Middle East.

Here you can see only a portion of the harbour is still here, the rest disappeared into the sea, although not so much through war, actually it happened by earthquake.

Today there is some flags out as a sign of countries in battle – this time the world cup football.

By the way the name ‘Palestine’ was invented by the Roman emperor Hadrian long before any Arab people populated this land.  Caearea was built by Herod, but there are signs here showing it was inhabited by Greeks, Crusaders and Muslims. 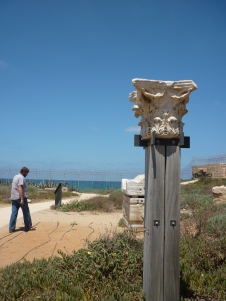 Outside a cafe at this place I ordered a hot dog with some french fries and sat outside.  The elderly man who ran the cafe had a strong New York accent brought out some pizza to one of my friends at the table and I noticed a small green tattoo on the man’s arm, not a particularly interesting design but when I went up to get some mustard I saw it again, it was about six numbers.   This was the unmistakable sign the Nazis used on Jewish prisoners in the holocaust camps, where as most people were rapidly slaughtered in the gas chambers not long after they had arrived by train, the ones with the tattoos tended to be those that were younger that were deemed suitable for working in the camp in unspeakable conditions.   Still today there are people who try to revise history and say it never happened. I would imagine the man is probably Polish and moved to the US in late 1940s and came to Israel not so long ago.  On one of the other tables he got chatting to one of the other staff, I didn’t hear what was said apart from he said he was from New York.   Its a sobering thought that history has come full circle, as the Nazis closely modeled themselves on the Romans to some degree and now as this small fragment of the Middle East is now owned by Jews again and some of them have reminders of tragedies gone by.

There are two films that can be watched in separate screens that show how Caesarea was restored by archeologists as you can see today.  Some other people on our trip went to scuba diving as there are parts of the ruins that can only be seen underwater.

People fishing, although I think this sign probably says you aren’t supposed to.

It perhaps doesn’t ‘go’, but I really like this wooden Caribbean style bar :o)

Current prime minister Benjamin Netanyahu has lived here in the town and so did Russian-Israeli Billionaire Arcadi Gaydamak who used to own football clubs in Jerusalem and Portsmouth UK, its incredible this location has changed hands through so many people.

This is an absolutely must see for any visitor to the holy land.

I will cover the Kibbutz where I stayed next…

My friend Magnus from Sweden who I work with and Marcel from the Netherlands who works for another Christian organisation in Jerusalem decided to spend a weekend on a trip, as Magnus was close to the end of his volunteer time in Israel.

Various different ideas were discussed on a biblical place to go, maybe Jericho (although didn’t manage to fully research safety and security in this place) or more of the Galilee. In the end we decided to check out the Dead Sea. I have been there twice before but not recently, but where as before I went up in a cable car, this time this would be a gruelling climb up the ‘snake trail’ at 3am, a zigzag path that goes right up to the top of the Masada fortress where a Jewish community once lived before tragically committing suicide after being hopelessly surrounded by the Roman army.  More information on Masada here.

After the shock of getting up at 3am to get there to see the sun rise and not have the intense midday heat when hiking up the path, this was definitely worth it I think 🙂