While I lived in Jerusalem, I found that Christians and Messianic Jews living there would host travellers and people doing short term projects.   This gives you a unique angle for visitors who both love Jewish people and the Jewish Messiah.    So after being there a few months, I was encouraged to do the same, often I was asked to show around someone who is new to doing volunteering work, see interesting places like Jerusalem’s old city, the Kotel, good places to eat out, but also somewhere to fellowship at the weekend.

Now imagine this.   New visitors have often told me how this congregation looks like a ‘normal church’ or doesn’t feel authentic.    Or, in the case of June of 2019 an angry-sounding woman commented on my blog tells me any congregation that isn’t her perceived style is pagan and “doing it all wrong”.

I got thinking, how do I reach out to these sorts of people to understand what I learned from the Messianic community in Israel?    I think its quite different from how people perceive what’s an ideal place to have fellowship.

Different religious buildings can be on a scale, one end of this scale is traditional and other is modern.   Let’s look at some well known examples:-

This St Paul’s Cathedral in London

This is the Dominion Theatre in London, its borrowed by Hillsong church on sunday

In conventional churches in the UK, these can have stained glass windows, giant organs set into the building, pews and similar decor.  Or, some can be modern places with car parks, modern kitchens and a stage with a projector for song lyrics.

In traditional Judaism, you will see buildings with pews also, which I think facing three sides of a square, some nice hanging brass lamps and lots of wood panelling everywhere. Also like modern Christianity, some synagogues will be new buildings with more emphasis on practicality and comfort and have a sophisticated AV system.

Neither traditional or new is wrong, they are just two different styles of how things are done.    Some buildings will be owned and some will be rented off someone else.

The Messianic movement in Israel is relatively new (modern Israel is only 71 years old) and the body of believers is small 20,000-30,000 people.  So congregations are small and budgets for a building are small and will usually rely on donations from other places, ie: Christian friends from other parts of the world.

So, therefore, Messianic congregations can vary quite a bit also in style.

I think I’ve visited 8 different Messianic congregations, one Arab congregation and 2 house type churches.  Here’s an example of a few well known ones:-

Here is Christchurch congregation inside the Jaffa Gate in Jerusalem, Israel.  Like a traditional-looking church but has services in Hebrew, Arabic and Russian.

Here is Kehilat HaKarmel near Haifa.   This is maybe the closest you will see to a Jewish Synagogue, it has an amazing custom-designed building, but I love the community, teaching and the outreach work that has been done there also.

This is King of Kings congregation in the Clal building.  This is a shopping mall with the congregation in the basement which is a converted cinema, and the 16th floor if you look up hosts prayer conferences in smaller gatherings.   This congregation has a big stage, theatre type sound and lights, and often used for hosting international speakers.   Teaching and worship is great too!!   This was my main source of fellowship.    Door is to the left to with the green stickers to the entrance of the shopping mall and you take some steps downstairs.

This is the Shelter Hostel in Eilat, this congregation is more look a house church but is a functioning youth hostel for any type of traveller (like me) with staff to run the place but also has optional bible study and worship on Shabbat.

This Jerusalem Assembly.    This is the most likely type of building I think believers meet in.    An ordinary office block.    Looks a little scruffy from the outside, but it has been painted up nicely inside.
All these places are authentic places for worship, the building shape and style doesn’t always matter, but these all provide bible teaching and worship for Jewish believers in Yeshua in different parts of Israel.
What I learned and love about the Israeli Messianic community
1. Buildings – 2. Christian or Jewish? – 3. Meeting place names – more soon…..

I took a very brief trip again to Capernaum, the famous first place where Jesus preached, really just 30 minutes quick stop on the way back from a tour, only to discover something interesting I didn’t see before…

My friend from Canada demonstrates.

Our guide told us this room of the synagogue was actually for a ministry to children; 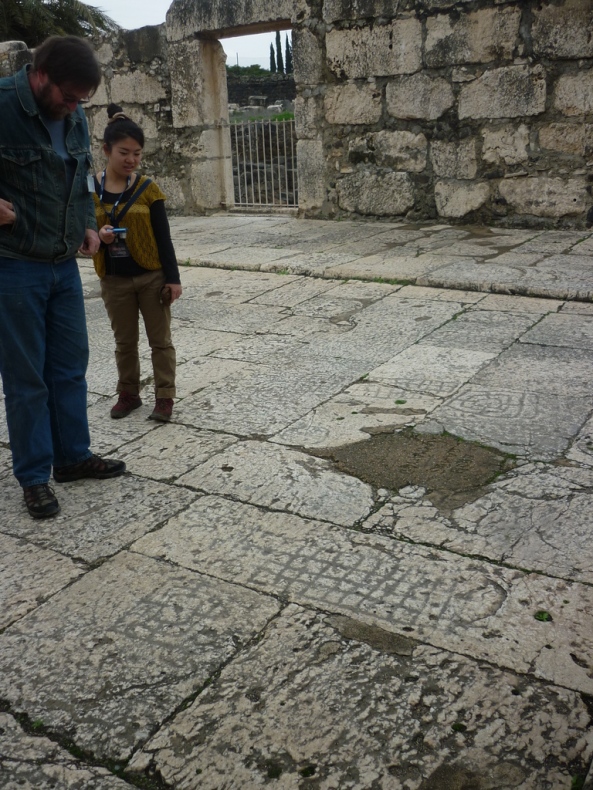 Looking at the floors, you see some interesting patterns here, Kind of like hopskotch but too small squares for even the smallest of children’s feet I think.  I guess its from some kind of game, its hard to say from what era the markings are from, makes me wonder how the first generation of Christians kept their kiddies amused though….

The cemented bit here has something that looks like Latin, I am sure that bit is modern I think…. 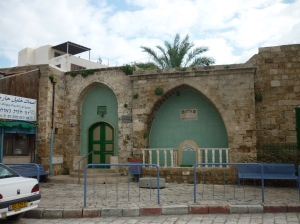 Akko is a very Islamic city, its not near any of the Palestinian territories, however Akko was run by the Eastern Empire (also known as Byzantine)  in 395AD, about 900 years before Islam came about.

Here you can see the familiar upright pencil shaped minarets the accompany mosque and buildings that are under Islamic authority.

From a distance its noticeable that this tall thin tower is a tiny bit lop sided.  This ought to be concern, seeing as one ancient one fell over in Morocco recently, resulting in about 75 people dead.

As other parts of the city are needing extensive work done on them like this below building is crumbling.  This court yard is called Khan al-Umdan and was built by the Ottoman Turks in 1784.

Whilst editing this I have just found the bit of nougat I forgot I had which was 10 shekels off the young chap who took this photo for me, he had all kinds of other nut cake and halva and Turkish delight on a stand here.

I set out to see if there was any part of Christianity here, and if there are Arab believers today.  There were of course, Crusades here, which is a regrettable part of history, from people calling themselves Christians acting in no way Christians should be.

There are symbols of a Jewish community in the old city as you can see below, and I went in a synagogue which was a few metres away from a mosque. 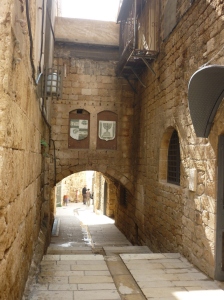 Unlike Jerusalem’s old city which has more defined quarters for the different communities with in the walls, here its more tricky to find where Jews and Christians live.  Are things peaceful between Arabs and Jews here?  Well I guess for most part, I do remember seeing on the news about some problems in the past sometimes. 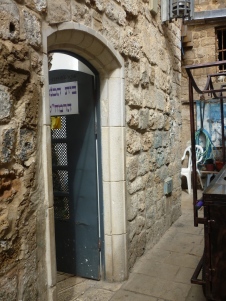 Left: Seems to be a church here, in a cellar type building.  Right: Small synagogue tucked away.

I didn’t find any churches that were open for casual visits whilst I was there.  This one was an attractive looking building but it was locked.  Of course its hard to tell if some churches are actual operating places of worship or just dusty bits of history.

The other little known faith that is here I have read about is the Baha’i faith, which has origins from Iran, and has a unusual temple with big gardens up in Haifa, but also has a place here.  I don’t know much about this though or get time to see it.

Its only when I got back home, I have found on the web Evangelist Baptism Church Akko, which has a mixture of Arab and Jewish believers in Jesus.  Check out their site here.

Just heard in the news about alerts that parcels containing explosives from Yemen were bound for a synagogue in Chicago in the United States.

It would appear from a lot of news stories, that this was a bit of an amateurish attempt at terrorism and this was a test run, to analyse security on delivery and logistics companies like UPS.

I think Muslims and the media that says that try to convince 9/11 Mosques are a good plan, have questions that need to be answered here.

I know people who worked for an IT company in Portsmouth UK, 7 years ago that did some overseas installation work all over the world including Yemen.   It sounds like shipments from this country are likely to be suspended.    What kind of impact does this have on people in Yemen with ordinary businesses that want nothing to do with terrorism?

Yemen is a poor Arab country, nestled between the polar-opposite economies of Saudi Arabia and Kuwait.  With strange things happening this month in the news like ex UK PM Tony Blair must be hugely embarrassed of his sister in law Lauren Booth who is ultra pro-Palestinian and become a Muslim recently as already an apologist for Iran and Hamas.   Shouldn’t spokesman in Yemen and other the Arab countries, regardless of what they think of America, Israel and Judaism, ought to be condemning these attacks, as this is only going to hurt the reputation and economy of their own nations?  This is a good opportunity to do some PR work for Islam and shun extremism is it not?

Yemen had a sizable Jewish community, but its one of a few countries that is now more or less a void for Jews as they all moved to Israel or America, in the same way that other Jews from the other mostly Islamic Arab nations had faced hardship.

But in recent years, Yemen has some people coming to Christ.  http://islamdom.blogspot.com/2007/10/2000-converts-to-christianity-in-yemen.html Please do pray for Yemenite people to see ‘dreams and visions‘ and find Jesus, and for those who who already believers to be safe from persecution.   Of course Israel and the west, US and Europe are likely to be on higher alert, so pray for terrorism activity to be exposed and stopped.