I got up and left the house at 5.30 to go to a IT conference at the Hilton Hotel in Tel Aviv.

As I mentioned before, Tel Aviv’s unique multistory bus station is a strange affair, finding the way out is very confusing.   With stairs and lifts that go all over the place, but no signs explaining the way to the street, I feel a bit like someone from the Labyrinth movie with David Bowie. 🙂

Once I go to taxi rank I jumped in a car and asked if the man could take me to the hotel, he said the journey would be 80 Shekels (£14) I told him I wanted a ride with the meter on, as this was too much, fully aware of rip-off scams of taxi drivers explaining the meter is ‘broken’ and offering a ‘special deal’ to naive foreigners, this driver complained to me he has to pay 35% of the journey to the government.  I just got out and walked away as he wanted to offer me 70 instead.  I just thought if you don’t want to pay those fees, find a different career!   Another driver who was polite and legit with the meter on charged me about 37 NIS instead. 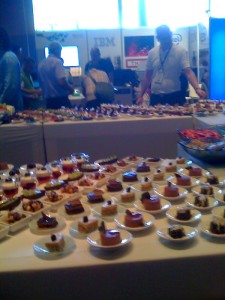 The food at the event was on par with a wedding or Bar Mitzvah, there is a huge buffet of different things on offer, traditional Israeli breakfast spread of bread, salad, yoghurt, etc, lot of cake after the first seminar and various types of coffee served by a waiter, and a really superb choice of things for lunch too.  There was also a free bar, well just two types of beers on tap, which was very welcoming when sitting outside given it has been about 35 degrees C recently.   Full marks for the catering, but then again with $850m earned last year I guess VMware didn’t want to look like cheapskates.   The Microsoft event I went to in 2008 which had the Windows 7 launch in London I only got a couple of sandwiches though.

The seminars were mostly spoken in Hebrew with the powerpoint slides and annotations in English.

Most of the products on offer were showing the new upcoming (v5) version of VMware ESX, and addons and third party software apps from other vendors, aimed at someone with a VMware system already in place.

I had some questions I asked the staff, such as differences between the freeware and paid for licences of ESX, they told me to go to the web site, but there isn’t much there.

So not a great deal of value for my job or for my plan to build a server at home, but I did get decently fed, a IBM 100 anniversary T-shirt and a HP flashlight, got to chat to chap from the Israeli company I used to work for and a few other people.