This week I took some time out of work in Netanya, a seaside city above Tel Aviv.

According to Wikipedia, Netanya is twinned with UK coastal city of Bournemouth and I can see some close connections to it.

Where as Jerusalem has public signs and information in Hebrew, Arabic and English, Netanya has signs in most just Hebrew and Russian, do you say ‘Da?’ or ‘Ken?’

I knew there were a lot of Russians in Israel (maybe 10-15%?)   but it didnt prepare me for the shop signs are mostly in Russian as well as well as products in the shops are more targetted to people from the ex-Soviet states.  Quite a few French as well, as some real estate agents have all their adverts in the windows in French.   Netanya has 190,000 people but that is expected to grow to 300,000 in 2020.

Looking around there are cranes building more apartments and hotels, and strangely some blocks with the windows missing, I am guessing as these buildings look somewhat dated, they are being refurbished with the outer skin of the building being changed around.

Getting around is quite easy as the streets are in normal grid fashion, a world away with mountainous Jerusalem, just like the above mentioned seaside town in Dorset, Netanya has cliff top views of beaches and nice walks, as well outside ice cream bars.

Shopping is more difficult here, as less people speak English than in Jerusalem.  There is a Shuk (outdoor type market for fruit and vegetables) and for most other things.  There is not many Orthodox people, Arabs or Ethiopians in this city.

I really like this city, with its cliff top views, I was really privileged to have someone lend me this really nice apartment which looks directly over the Mediterranean, plus has wireless broadband, TV and cable, nice big rooms and an underground garage.  I stayed here several days with my Dad and his two friends and couple more on my own.

This is a mostly fairly secular city, I only see a few Sukkot tents but not many.   This one is in the balcony directly below my flat, althought strangely theres no roof on this tent. 🙂 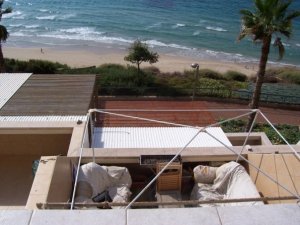