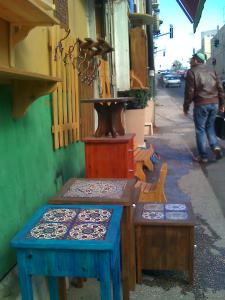 Walked past this shop with some tables for sale out side around Hillel Street.  I really like middle east style furniture that has ceramic tiles on top.

I was in the home repair workshop the other day, BFP has a team of people that does repair work to Jewish people in need of their house repaired.   I needed to pinch some side cutters to chop off a cable tie inside a computer I was fixing.   This room with the smell of paint thinners and oil for a block for sharpening tools reminds me of my grandad (Henry Hayward) who was a carpenter and as a child I would watch him sometimes fix things.  Both these things made me think of two things.  I have a coffee table that Grandad H made, its nicely made although the pretend wood effect formica top looks very dated now.

What I would like to do is somehow get some nice middle east style tiles and recover the top of the coffee table.  I think the formica stuff is glued securely on and I am not sure what the best way of doing this (stick tiles on top or try and remove it?) would be.  If you have expertise in this kind of thing please do comment.

I had a small amount of holiday left and I had wanted to check out some other parts of the country and visit Jordan, so after a few attempts at trying find a time me and some friends from BFP turned out not to work due to various people recently leaving, meaning various departments got much smaller thus people not able to get time off. With me my department (IT) was also about going to go from four to one in a few weeks, so the week with American thanksgiving day was the now or never time to go.  This day off for all staff gave me the advantage I could use all two and half days of holiday and the weekend to do some kind of epic trip.

Eilat is a city right at the bottom of the country, Israel tapers off at the bottom into a sharp point that stabs the top of the Red Sea, tightly wedged between Egypt and Jordan. A good tip someone gave me is not to drink much before going as that the bus journey has no toilet onboard and there is just one stop in the middle of the desert highway, oh, and the journey is 4 hours 45 minutes.

I debated going after work, but this meant I would have to do the journey in the dark and that ride is long but could be quite spectacular during the middle of the day, so the ended up going on the Wednesday.  I took a bit of a risk and didn’t buy a ticket in advance as I couldn’t find an option to buy a ticket online, in turns out egged.co.il is quite poor, the English part of the side is basic, and you can buy tickets online only on the main Hebrew section.

Getting the ticket was pretty easy and the journey was pretty comfortable, getting out of Jerusalem into the outskirts of Talpiyot took a while, after a while we were traveling parallel with the Dead Sea.  I started to seen the sign posts for the Ramon Crater which I visited back in September.  This time I got to see some large modern hotel complexes that are on the shores of the Dead Sea, I think this is for a more specialised type of tourism for people coming for health treatment as the mineral rich mud from the dead sea can treat everything from acne to psoriasis, so people can come and dip in the unique 30% salinity water that is the lowest place on earth.

The journey is long, I didn’t speak to anyone along the way, I did notice another British man next to me, he was busy listening to his ipod and I was listening to mine, mainly I had the sound track to Indiana Jones just to add to the excitement of the trip to Petra in a few days time.  After a good while we got to a petrol station for a half an hour break, there was a burger place, and shops to get coffee, ice cream and sweets and use the toilet.

I remembered on the BBC web site there was a tragedy last year as a bus crashed on a bend killing several people, because the bus driver foolishly overtook on a blind corner, but rather shockingly, and being used to often poor driving here in this part of the world, this road is a single carriageway almost the whole length down to the sea I also witnessed us do overtaking on some parts of the road with not so clear views of roads on curves.  (if you look on a map there is only about two proper roads that head down in to funnel shaped lower half of Israel that is the Negev desert)

On the second half of the journey I got to see more geology wonders of the desert, strange coloured puddles by the side of the road that were green, it appears there were copper mining here as well.  Just at the approach to Eilat itself is a large salt factory which the signs showed were for making salt for general cooking use, there were large piles of the fine white stuff.   When disembarking the bus and spending five minutes walking around the block twice looking for the toilets before finding they were underground via some small steps that weren’t that noticeable.  Heading down the main road I can immediately see a strange pyramid shaped cinema (ironically the border for Egypt is just 6kms away 🙂 )  shopping malls with neon signs in Hebrew and the panoramic view of the Red Sea with Eilat being at the top.