One of the most great things about Great Britain that a lot of my non-British friends I have been working with would agree is our pop music.

Take a city like Manchester, probably the most musically fertile places in the world.   Everything from The Smiths, New Order, M-people and of course Oasis started up there.   In the late 70s and early 80s bands like The Selector, The Specials, Madness and UB40, took some of the ska and reggae sounds of the Carribean and brought them into a new audience in the UK and whole sub genres of music like two tone (referred both to the sound of music and that it appeal to two different racial groups) were born.

Punk, was of course very British with The Sex Pistols and The Clash, these have an obviously aggressive, political theme for it, but it was good musically as well.

The early 1980s had a lot of music that represent the depression that had was around in the 81-82 era, just listen to say the Specials “Ghost Town” which was an iconic track from that period.

Indeed Britain is and should be very proud of the vast amount of talented bands spawned from our green and pleasant land.  And I absolutely love pop music of all kinds, old and new, popular and obscure, British and otherwise.

So what the hell happened with the charts in December 2009?

The X-factor.   Its cheesy but fun, kind of like Eurovision, some pleasant but short life span tunes often appear often at Christmas.   But Christmas isn’t always cheese.   Kylie Minogue had a Christmas number one “I believe” which was a sweet, happy feel good sort of song, just the sort of thing Kylie does best.

Someone came out with the idea the Rage against the Machine should reissue “Killing in the name” for the Christmas number one.  Oh dear.

Facebook is really good for getting people onto Band wagons, whether its for or against the BNP, or immigration, every type of soap box which people want to stand on, it only recently I have seen the enourmous amount of motivation in can start up to lead people.   Take the Wispa chocolate bar was brough back by a Facebook group.   I didnt even realise this product had been discontinued in the first place, by nevertheless the PR people from Cadburys listened and people rejoiced as the familiar blue packaged fluffy centre chocolate bar reappeared in corner shops all over the UK again.

So when a campaign to get Rage to number one, Simon Cowell the often rude and disliked record boss who makes short life span fun but ultimately disposable music appear and disappear is the target of a campaign, a bit like hating a parking warden after getting a ticket.

There is nothing wrong with hard rock or metal, but sorry I think Retards against the machine have absolutely no substance to them.   Getting 40,000 or so teenagers to click to buy a 79p track on iTunes just to make the X-Factor bands lose was more of factor to see them win.   The song was poor in 1992 its certainly no better now.   Rage’s message is all about being up against ‘the man’ and being as their title, ‘against the machine’  the fictitious authority which make people like to be on the rebellious side.  I hope to see them fast fade away as quick as snow in Basingstoke.   Maybe they will appear again 17 years time again.

Of course the angst ridden teenagers that bought this song will be a bit disappointed to find Rage’s record label is the same company as a certain Mr Cowell’s.   So in Rage’s expletive ridden lyrics, “f*** you, I wont do you tell me”

You did exactly what you were told and gave your pocket money to the men at the record companies that put together throwaway music, both X-Factor and kiddiegrunge, and they are chuckling you did.

Do yourself a favour, there were probably more than 2 songs in the charts.  Turn on your radio and listening to real music with talent.

This local man from Eilat showed off his modified car, a 1963 Peugeot 404.

The car’s body has been painted to look like its made of wood, the roof of the car has been decorated with a model of the proposed new temple which is predicted in the bible.  You can see little figures and animals have been glued in place, even on the dashboard 🙂

One last thing.  Its a pity he didnt keep the badges on the car, as the Peugeot Lion looks exactly the same as the Lion of the tribe of Judah 🙂 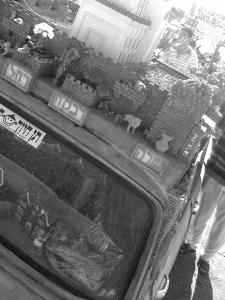 After arriving in Eilat, I seem to have left my proper map of the city in my flat, and the freebie map I got from Hertz Israel from somewhere showed Eilat quite decently but nothing that showed the Youth Hostel.

Eilat is safe place and generally free of political problems (apart from there was one bombing about 3 years ago though) and is something akin to Brighton in the UK as a weekend holiday resort with funfairs and bars on the beach, but also with some Vegas style themed hotels springing up a few places along the coast.  This one here is strongly influenced by the dome of the rock from Jerusalem. 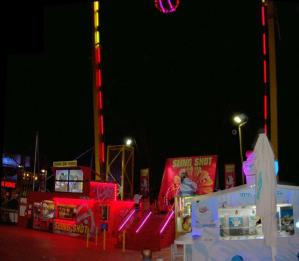 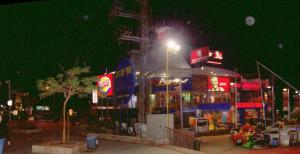 I took a look at the beach and the shopping mall overlooking the Red Sea, this place is definitely something of a chill out place and you can see why its a popular holiday resort with Israelis from all over the holy land, there is a small airport but I am not sure which places fly there.

There is a bar and restaurant on a pier, so from here you can see four countries, from Israel to Egypt and Jordan and in the distance Saudi Arabia.  Underneath the pier you can see some workmen where doing some welding work to the steel bars underneath.

I gave my room mate a quick call, it was then I was told that my airline (BMI) were ceasing flights to Israel after an article in local Israeli news and I would have to change my return flights home.  Anyway he gave me the correct street to get to, and although I got to the wrong road at first and knocked on a bomb shelter next to a shop, which a young man was using to practice playing his drums down there, he pointed me to the next street that I had overlooked to find the shelter.

The Shelter!   This place is well known amongst Christians that have been in Israel for sometime, as the owner of the hostel is a Jewish believer in Jesus, so are quite a few of the people that just come and hang out there.  There is a regular bible study in the lounge often with some of the staff there, its optional though, and the hostel doesn’t proselytize any visitors that come there.

I like youth hostels as a single chap who likes traveling as you can meeting people from all over the world and swap stories of where you have been or quick find some new friends to go out somewhere.  It was quite dark by now and there wasn’t a lot of people around when I arrived, I went round the corner to get myself a falafel and sat in the lounge and spent a quiet evening chatting to Canadian and Swedish people and the staff there.

In terms of the Youth Hostel’s ratings its pretty good as far as hostels go, although the bathroom could of been a bit better with no soap or paper towels in the toilets, the showers were ok thought.   I was in a small dorm room with 5 beds, two bunks and an extra bed.  I didn’t sleep very well the whole of this trip to be honest, there was always something to disturb me some how.  During this first night I got woken up by some thoughtless person who arrived late at night, mumbled things in Hebrew and moved his stuff around the room whilst myself and a Canadian chap were trying to sleep.  Thought the next day he had some kind of nocturnal OCD habits or something.   The small size of the room gave not much space to put shoes, bags and clothes for all occupants.

Anyway I was getting more excited at seeing Jordan, Petra, the Nabutean desert, and tropical fish aquarium in the next few days…