IT repair stuff.   Skip to next articles if you just want to read about my visits to bible locations.

One of my colleagues asked me to look at old (about 2004) Dell Inspiron laptop, it needs to have the files moved over to her new Win7 based HP Pavillion laptop.   The Dell is being retired as it has some problems freezing upon booting up.    I suspect this is an overheating issue, so I decided to pull it to bits and clean and repair it.

This particular laptop like a lot of Dells is one of the easiest laptops to take apart and work upon.   Rather in the common tradition of throw something away I wanted to see if I can make it usable.   To get this machine apart it just needed a plastic strip and keyboard removed.   To do my housemate’s Toshiba Satellite and my old Compaq to fix clogged fan/overheating issues required the whole machine to be completely dismantled, ie: remove screen hinges and separate both halves of the base, which is fiddly and needs about three dozen screws removed.

Overheating issues are a common issue with laptops, Toshibas often get dust stuck in the fans causing the bottom to get very hot, causing a fault or shortening the life of the motherboard and processor chip.  HP were also plagued with problems with their Pavillion line.   Here I will show you the techniques I used to fix this Dell:-

Brief legal spiel: Warning, do this at your own risk. Additional, before taking computer apart, disconnect all cables and remove battery.  Work somewhere clear and put the screws in such a way where they wont get lost or get put back in the wrong places.  But hey, if you computer is too expensive to get done by a shop and otherwise useless, and you have not fixed a laptop before, you might as well try this for the first time. 🙂 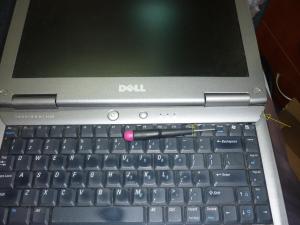 Almost all Dells can be dismantled by taking out the plastic strip above the keyboard.  Left: Gently use a screwdriver to prise the small slot to the right of the plastic strip, one you lift it up, you might need to also prise a small gap above F12 key, then just jiggle it a bit around the screen hinges and the panel will gently come off.   Right: remove the four screws with the rings I have shown.

Left: I have flipped the keyboard over, detach the keyboard cable, it just needs a gentle wiggle to detatch.  Then, remove the screw marked and this metal panel can be lifted out. Right: there are four screws that hold the heatsink and fan assembly on.   These screws have numbers on as they should be removed and refitted in that sequence, as to avoid any weight of the heatsink putting too much pressure on one corner of the CPU chip.

Left: I have cleaned off the old dried up grease with a some kitchen roll and a small bottle of alcohol (CD player cleaning fluid or nail varnish remover) from the surface of the processor chip and the copper surface of the heatsink, so its nice and shiny.  The heatsink is sitting upside down ontop of the battery. Once the grease dries up, it loses its ability to properly dissipate heat from the processor chip.

Right: I have put a layer of new thermal grease on the processor, I use this stuff called Artic Silver 5, which is one of the best thermal grease on the market for its thermal conductivity.  You need to adequately cover the surface of the chip, not too much or too little.  The empty space where the heatsink and fan goes can be sprayed with canned air to remove dust and dirt.

This the fan.   Another four screws were removed to get the motor out.   Towards my fingers you can see lots of fluff has collected inside fouling the vents of the copper heatsink stopping air from escaping.   Zoom in and you can see where the yellow arrow is and spray some canned air to clean all of this out.   Spray more air to get all the dust from the fan blades.

Reassembly is the reverse of disassembly.   Make sure the CPU fan is mounted on nice and tight but evenly.  When refitting the plastic strip, align the left hand side first, and work your fingers in snapping back in place towards the right hand side a bit at a time.   One thing I have not done is clean and replace the grease under the other heatsink where the graphics processor chip is.   This is worth doing at the same time though, as they can give heat problems, especially on HP laptops.

(shakes jam jar)   I am looking for funds to raise money for flights and insurance for my return to Israel in January, if you find this useful, or would like some advice, please consider donating me something, so I can continue to service equipment and resources for a Christian charity in the middle east.  If you would like your computer professionally repaired in UK or Israel please get in touch, I can do screen replacments or something minor like missing keys and software problems, I would be happy to do work in exchange for donations.   Thankyou.

3 comments on “How to fix a laptop with overheating issues, like this Dell Inspiron 1150”