Back earlier this year there was the convoy of protestors from Turkey.

At the same time, around the Christian Armenian community in Jerusalem’s old city put up lots of posters around the city warning what happened just under 100 years ago.  Click to zoom.

This was a reminder of the men and women killed in a genocide against the Armenian people.   With so called peace ships that fooled the media supposedly trying to help Gaza but had terrorists with weapons, its a warning that extremist Islam affects everyone.

After visiting the possible location of the last supper, me and my friend Dave took a look around this section of the old city.

This is the famous French Catholic church St Peter of Gallicantu, its at the south west section of the old city, close to the walls.   Like most of Jerusalem, this place has been destroyed and rebuild many  times over, so the building you are seeing now was built in the 1920s and repaired quite a few times since then. 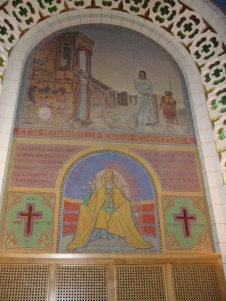 The images set into the walls of the inside of the church are certainly striking and beautiful as well as the outside and pictures set into the windows.  There is Jesus at the last supper and there is Peter and Jesus on the other picture, if you look closely you can see Roman soldiers warming themselves around a fire.  The text is in French.

There is three main floors to the church, you can get to another hall below, and a basement underneath that.

This plaque hints at that visions have been seen in the natural pattern on the stone here, I didn’t go looking around to see if this claims have any truth to them though.

There is large amounts of archeological remains in the yard outside. 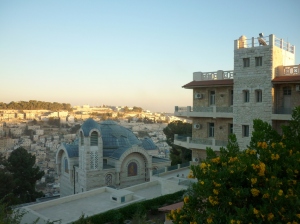 Left: under this canopy there is a complete model of the old city you can see.  Right: St Peter’s from a distance with an interesting block of flats overlooking it and the Arab part of the city and the Mount of Olives.

Atop of the church is a symbol of a cock, a sign of when Peter denied Jesus three times, because of the cock that crowed, as told in Matthew 26.