Heading to Jericho which is in Palestinian territories is only 40km from Jerusalem, This ancient city is somewhere I had always wanted to visit, and scouring the internet seems to not have much in the way of safety recommendations but seems popular with all kinds of visitors to the holyland, as some good friends from the UK were over it was a good chance to take a jolly over and investigate the oldest still inhabited city in the world….

After driving through an Israeli checkpoint, no action is needed as you only get ID’ed on the way out, so its just a case of driving slowly past a kiosk, a bit further is another checkpoint, just some concrete barriers and two soldiers from the Palestinian government who just asked for passport from my friend who was driving.

This picture was taken some distance away, and this is the best zoom I could do, as for obvious reasons I don’t want to be found taking pictures of any kind of checkpoint crossing anywhere!!   Seeing uniformed soldiers with their lapels in Arabic with Palestinian symbols was quite scary for a minute there!

I came to the city trying not to have any preconceived ideas, I have been to Bethlehem and passed through a few small Palestinian towns and also visited Arab Israeli cities like Nazareth and Akko. 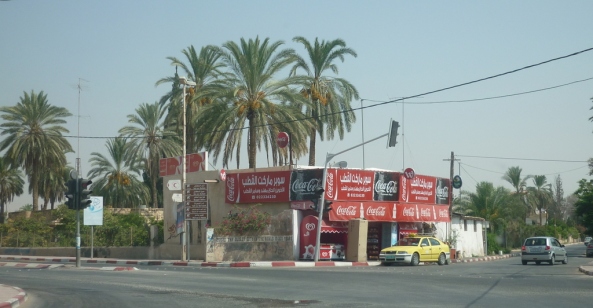 This corner shop was the first business we came to.   CocaCola is a brand you find everywhere in the world, especially in this corner of the world and I remember somewhere, one of the Arab nations were trying to make an equivalent Cola drink for the middle east market.

This part of the West Bank is quite odd, there are old and new parts of Palestinian society together.   For instance, there are run down looking houses, factories and farms, and there are large overhead gantries over the main road advertising technology and home furnishing trade conventions.

This sign is for Jawwal, a Palestinian mobile phone operator.

This concrete wall, isn’t a separation barrier, or any kind of border, seems to be a fortified car park for police vehicles, it does look unfinished with unrendered concrete looking like just as a imposing as the wall I see next to Bethlehem about 3-4 miles from my house.  Maybe its inspired by the ancient walls of Jericho…

Next: to Jericho’s city centre!