The must see place in Jericho is this:

An ancient church built on the side of the cliffs, not only that, which looks like a spectacular feat of construction of making it staying it up, but also its the likely place where Jesus was tempted in the desert for 40 days.

We didn’t use the cable car, it looks fun but we had already followed the signs to the place to this car park.  The cable car looks like it runs about a couple of kilometres away. 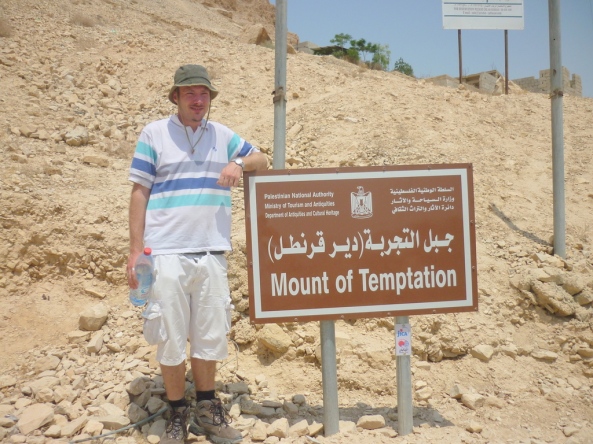 About half a millisecond after this picture was taken, I need to sharply remove my elbow as I realised this sign had got red hot from being the view of the sun from the 43c or so heat that day! 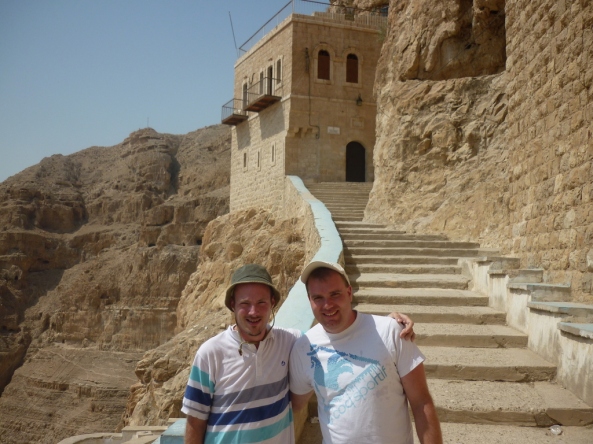 Me with Jeremy, after climbing up these steps during midday heat of the desert were dripping with sweat.

After a being a bit disappointed when getting to the big black door behind us which was locked, I thought I would knock it just for curiosity, and we were just about to leave when an Arab gentleman asked us to come in. 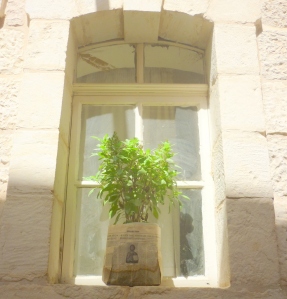 A Byzantine monastry was built in the 4th century, the present monastery of the Temptation was reconstructed at the end of the 19th Century, in the impressive impossibily standing place you see now.

In the hallway just inside the gate of the church, noticed this plant on the windowsill was covered in a newspaper that is in Greek, unusual, as I see newspapers in French and Russian, as well as Hebrew, Arabic and English of course, but never Greek before, but a reminder of the Greek Orthodox church who currently run this place. 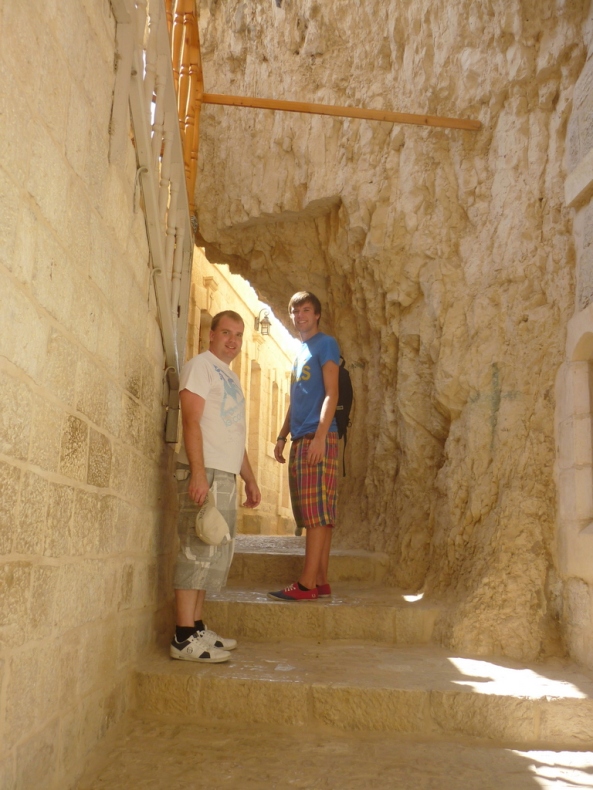 This is like no other church I have ever seen!

Through another door way there was the chapel itself, not a lot of space at all for a congregation, but the painted ceilings were joined perfectly with the natural rock formation of the cliff, not sure how often cracks or other structural problems happen, but its an amazing place!

The man told us we were not allowed to take pictures inside for some reason, so sadly I can’t show the insides of the chapel.

Some scriptures showing this site:-

Luke 4 : 1 Jesus, full of the Holy Spirit, left the Jordan and was led by the Spirit into the wilderness, 2 where for forty days he was tempted by the devil. He ate nothing during those days, and at the end of them he was hungry.

3 The devil said to him, “If you are the Son of God, tell this stone to become bread.”

4 Jesus answered, “It is written: ‘Man shall not live on bread alone.’”

5 The devil led him up to a high place and showed him in an instant all the kingdoms of the world. 6 And he said to him, “I will give you all their authority and splendor; it has been given to me, and I can give it to anyone I want to. 7 If you worship me, it will all be yours.”

8 Jesus answered, “It is written: ‘Worship the Lord your God and serve him only.’”

9 The devil led him to Jerusalem and had him stand on the highest point of the temple. “If you are the Son of God,” he said, “throw yourself down from here. 10 For it is written:

“‘He will command his angels concerning you
to guard you carefully;
11 they will lift you up in their hands,
so that you will not strike your foot against a stone.”

13 When the devil had finished all this tempting, he left him until an opportune time.

Next, more exciting places up on the cliff!