I mentioned that I took some time back in the UK to see family, this was good to have a break, as I had been particular busy at work, and have new servers and network equipment to install quite soon, some of this will mean some weekend work maybe.   I hadn’t been back home since January so this was a good chance to relax for a bit. 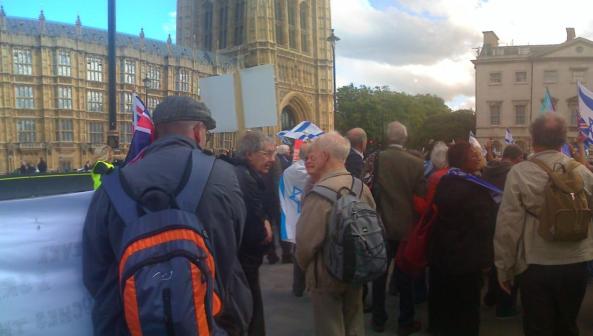 Back in the UK, I decided to take a trip to London on a National Express coach to attend a prayer and demonstration outside of the House of Commons buildings in London, to stop Israel from being divided, and the very real threat of violence and war as a result of this. 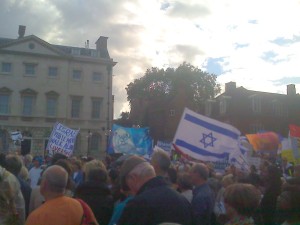 There was about 300 people outside here, some of the banners were also in Hebrew as there were a few Messianic Jews and Hebrew speaking Christians there.   This was organised by Christian Middle East Watch, a ministry I haven’t heard of before, but was impressed at what the had to say.   The only thing that worries me, is that most British Christians that support Israel tend to be over retirement age, I wish there was more of all ages of people involved, for people praying, promoting and visiting Israel into the future.

Back in Portsmouth, I got a chance to have a decent roast dinner and beer for £6.50 (wow bargain!) with friends from church for lunch at a new Wetherspoons pub.   I also got to go blackberry picking with my family including my 1 year old niece by some bushes next to a golf course.   It was a bit of a shame I only got to see a fraction of the friends I wanted to see in the two weeks though.

I took a train to Wales to visit the UK office of the charity I work for, to roll out some necessary new equipment and antivirus software.  I didn’t manage to get everything done, but I have remote software to do some updates, the 2 hour time zone difference gives me an advantage that I can make some changes without disturbing the users from working.  Working at this site isn’t part of my official responsibility but I really wanted to do some preventative maintenance to ensure they are less likely to hit problems in the future.

Got to watch a brief bit of TV in Wales at our UK director’s house of the UN conference with Benjamin Netanyahu speaking, which he did brilliantly, with difficult decisions ahead with more determined plans for a Palestinian state being presented.

Slightly humourous moment on the plane back to Israel, I was flying on a Saturday so there weren’t any religious Israelis on the plane, but when using the toilet on the plane, someone had eaten some bacon flavoured crisps and left the empty packet behind on the floor!

Now back in Israel again, just at the right time before Rosh Hashanah (Jewish New Year), so I got only work half a week, and spend 2 1/2 days relaxing, actually had to 3 hours of important work from home due a server that broke just before leaving.  Its funny when celebrating the New Year (5772)  people aren’t actually waiting for a special change of a clock or anything like that, just good food and company of friends.

I am also fixing two other volunteer’s laptops, setting up a wireless router in a neighbour’s home which the current one won’t work with the HOT supplied cable modem for some reason, enjoying church, friend’s birthday evening out at a waffle restaurant today.