Various news sites I sometimes read came up with this: 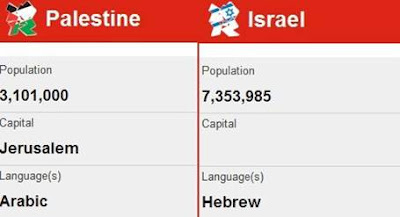 Apparently the Olympics web site admitted an ‘error’ on their web site, and changed it later.  They also ought to realise that official languages in Israel are Hebrew, Arabic, English and Russian too.

Looking at the official web site via the search engine, there is no mention of the 40 years anniversary of the tragedy that killed 11 Israelis in 1972 Olympics in Munich.   There really ought to be a special moment to remember that sometime in the schedule this year.

I wasn’t aware that the Palestinians have a representation this year even though they are not a sovereign nation as of yet, I don’t even know that they have a national anthem if they were to get a medal, after quickly checking out Wikipedia there is one disturbingly, the lyrics shown translated into English have some worrying theme, read this Wiki article on it here.  Here is another article from Arabic Wikipedia also in case perhaps I am being unfair.

Is there any calls from any moderate Arabic speaking country to challenge them into having a song with less violent sounding words I wonder? Rather than a  “volcano of my vendetta” or “And my intention a bullet and a volcano retaliation” or whatever it is.

The Olympics shouldn’t be a political event.  But it should recognise people lost from terrorism in 1972, just as it should kick out cheats and dopers, and so far the authority are making a very poor effort.