I didn’t think so, until the beverage I got from Aroma had this interesting message on top of it:- 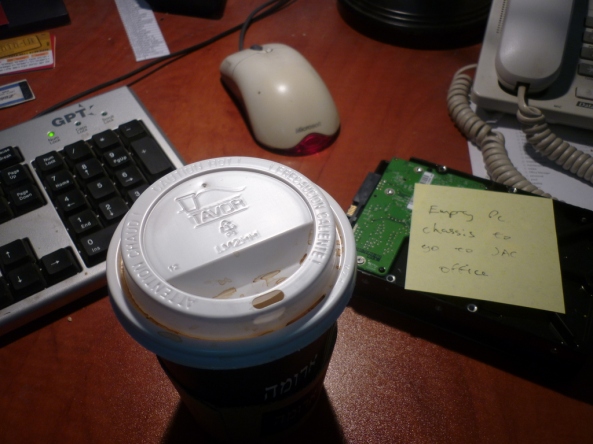 It’s made in a factory in Tavor (Mount Tabor, V and B are often interchangeable in Hebrew) funny as this is also the mountain considered to be the most likely place of Jesus’s transfiguration.

It’s also an exciting sounding place I’d like to go.  I am waiting for two new PCs to arrive at work, then I need to visit Karmiel to install these are some other maintenance then I will visit some of these places.

I think the town at the foot of Mt Tavor is Arab.   I’m now curious if the little hole is to let the heat out slowly, of it could be a symbol of something implied over Tavor? 🙂


Actually now you can see it on Google Street Map View!!    I’m not sure if this ‘spoils’ visiting biblical places or not, you could see it like a spoiler in a movie or trailer to get an idea what to expect – in this case Mount Tabor on your computer is more of the latter as you can’t see much pass the car park when you get to the top.

Matthew 17 (I have added some colours for emphasis)

After six days Jesus took with him Peter, James and John the brother of James, and led them up a high mountain by themselves. 2 There he was transfigured before them. His face shone like the sun, and his clothes became as white as the light. 3 Just then there appeared before them Moses and Elijah, talking with Jesus.

4 Peter said to Jesus, “Lord, it is good for us to be here. If you wish, I will put up three shelters—one for you, one for Moses and one for Elijah.”

5 While he was still speaking, a bright cloud covered them, and a voice from the cloud said, “This is my Son, whom I love; with him I am well pleased. Listen to him!”

6 When the disciples heard this, they fell facedown to the ground, terrified. 7 But Jesus came and touched them. “Get up,” he said. “Don’t be afraid.” 8 When they looked up, they saw no one except Jesus.

9 As they were coming down the mountain, Jesus instructed them, “Don’t tell anyone what you have seen, until the Son of Man has been raised from the dead.”

10 The disciples asked him, “Why then do the teachers of the law say that Elijah must come first?”

11 Jesus replied, “To be sure, Elijah comes and will restore all things. 12 But I tell you, Elijah has already come, and they did not recognize him, but have done to him everything they wished. In the same way the Son of Man is going to suffer at their hands.” 13 Then the disciples understood that he was talking to them about John the Baptist.

The climb up the hill goes in a zigzag fashion which looks not too difficult to do, or you can go up in a car or bus.    Interesting enough, although three shelters were erected on here, there are two churches (Catholic and Orthodox) at the top today.   Its not guaranteed if Tabor is the exact place of the transfiguration, but seems the most likely place by biblical historians.    The other mountain in the north, Mount Hermon is covered in snow a lot of the time, I think Jesus would of mentioned this if it was there. 🙂    This part of the world has had earthquakes so maybe the shape of the landscape could of been different then, which Jesus mentioned in Matthew 17 : 20 that mountains aren’t necessarily a permanent fixture.

Related: My quick glimpse of Mount Tabor in September