I guess the Mediterranean is tumultuous in several different ways.   The sea can be rough, friends of mine witnessed a tragic fatal drowning in Tel Aviv in Israel, and the bible tells us of how rough the sea was when Paul crashed him boat off the coast of Malta.   As well as wars in Israel and Egypt, there was the war in Cyprus in 1974 when half of it was taken over by Turkey.   So I guess Gibraltar’s rock lets you see what goes in and out of the Mediterranean, a pretty unbeatable place for a military base.

This is a tiny place.

Gib (common nick name by local people) feels like a pleasant British town with red telephone boxes, Pounds sterling (with its own slightly different coins) although people driving on the right with British style plates starting with ‘G…..’   They have their own telephone provider, so I decided not to turn on data on my smart phone, which meant looking on maps was a bit tricky. There probably isn’t much crime in Gibraltar but also I wonder if the police seem a bit harsh!

The Youth hostel I stayed it is clean and functional, dingy and somewhat dull and not much more I can say about it.   I only saw one other visitor as it seemed fairly dead.   It’s the only hostel there and I’m sure most people are only there for just the one night.    Interesting

enough, there was an African chap who was running the reception called Idris, the same name as a early figure in Morocco’s history. 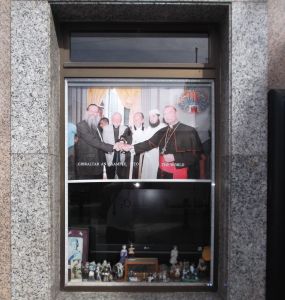 This picture I saw in a window of a Jewish owned shop shows pleasant relations with different faith systems there.

It seems much of the shopping in Gibraltar is aimed at British mostly cigarettes and alcohol available tax free.  There’s a few nice gift shops as well, as restaurants offering a lot of British style food.    I was exploring around until quite late, so by the time I went to find somewhere for dinner it was 10pm and most places were closed, so I went to the local pizza hut.

Although it was a Sunday I planned to climb up to the top of the rock that morning, I saw a few sign posts for some Evangelical and Catholic churches there.   Many of the Jews here are of Moroccan descent.   The Jewish community of Gibraltar is quite interesting.   There are about 600 of them, and I saw signs around the city that they were all prepared for the coming (Purim) holidays.  I actually saw some Orthodox people coming out of a synagogue which I asked them for directions to my youth hostel.

Here’s some other well known residents who live here, the Macaques are the only apes that live in Europe, they live on top of the rock but do sometimes get nosy and explore around the town.   There’s a £4000 (!) fine if you are caught feeding them, as they are only meant to eat plain fruit and vegetables. 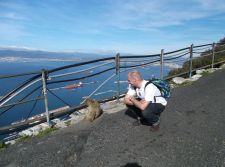 The plaque shown in the top right was a memorial funded by local Gib taxi drivers for the loss of one of the monkeys a few years ago.

You can clearly see Gibraltar airport runway strip which is part of the border crossing to get in here from Spain.   I think this highest pinnacle isn’t reachable by anyone, would make a great place to do climbing though

Getting down from the rock is made simple with a Swiss style cable car for a £6.75 ticket.

I didn’t get to travel to the bottom coast of Gib as it was time to start to book my ferry.   Contrary to what I had read, to get the boat across to Tangier, actually required getting a bus a short distance to Algeciras (pretty sure thats an Arabic name too) in Spain, which I could jump on the boat just as it was starting to get dark.

Previous – 2. Spain, the bottom of Europe and the rock of Gibraltar

Next – 4. Sailing to Tangier