Several times I passed this wall with bell outside.  This is the door entrance to Fez’s Jewish cemetry.  This is actually a part of the Jewish “quarter” of Fez’s old city.   But there is nothing obvious there remaining that is Jewish apart from this and Aban Danan Synagogue.

It took my several attempts passing to find if this place was open.   So on the Sunday before I left I finally got to go here.

Below: I think like in Israel, some of these nice fountains in Morocco aren’t running due to concerns of drought. 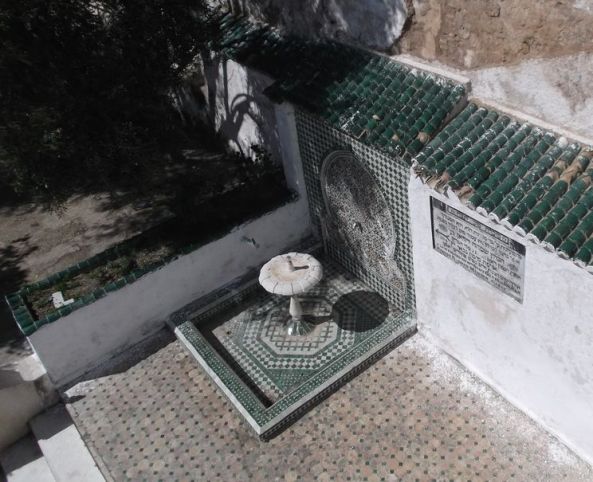 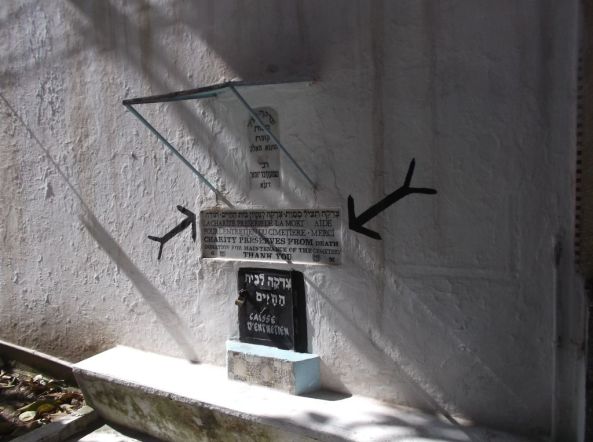 Charity preserves from death.   Like to know if there is money being raised for the remaining elderly Jews who still live in Morocco.

Some of these graves are for more famous rabbis.   Just like the graves I’ve seen on Jerusalem’s Mount of Olives, this chimney structure I’m not sure of its exact purpose, but people put candles in a chamber underneath.

Few people have only passed in the last decade.

Jewish museum inside the cemetery walls.    Its shut, couldn’t find anyone to tell me if it ever opens. 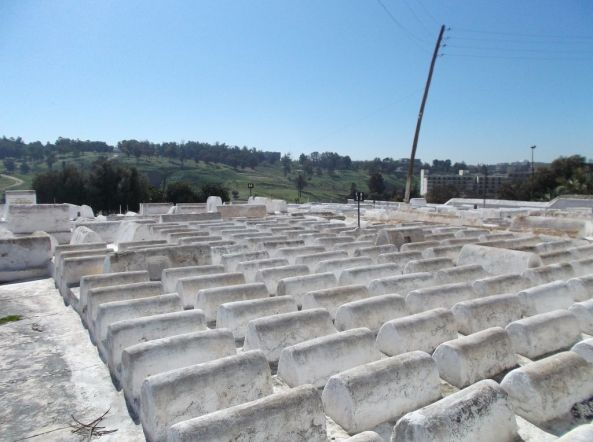 This grave is from a Jewish girl murdered as she turned down the marriage offer of a Muslim prince.

The only actual Moroccan Jews I could find were a couple who were doing the upkeep of this cemetry.   They didn’t speak English.   I did however meet about 15 Israelis on a tour here with a leader explaining this place in Hebrew.

Well, what have I learnt from the Jewish history of Morocco?  Its sadly almost to extinction.   The remaining Jewish people are small enough in number to be practically invisible.  Since the modern state of Israel existed in 1948 and Morocco became independent in 1956, moving over to a nation that’s more of a natural place to be consistent with history has made Israel a main choice in leaving Morocco.   Although the Jews of North Africa had not experienced the horrors of the holocaust, persecution has happened here as well.

So my journey is done.    No more Jews in Morocco.
עם ישראל חי  – Am Israel Chi.   (Meaning The people of Israel live.)

Did the Lord plan for the Jews to up and leave from Israel, and North Africa, and other places?

Isaiah 43 : 3 For I am the Lord your God, the Holy One of Israel, your Savior.
I give Egypt as your ransom, Cush and Seba in exchange for you.
4 Because you are precious in my eyes, and honored, and I love you,
I give men in return for you, peoples in exchange for your life.
5 Fear not, for I am with you; I will bring your offspring from the east, and from the west I will gather you. 6 I will say to the north, Give up, and to the south, Do not withhold; bring my sons from afar and my daughters from the end of the earth, 7 everyone who is called by my name,
whom I created for my glory, whom I formed and made.”

God wants Jewish people back from different parts of the world they were dispersed back to Israel.   Soon, a large revival will happen as Jesus’s return back to Jerusalem happens as promised in the scriptures.