With two years after the Brexit referendum in the UK, people on all sides are still upset, a plan for a modern Britain hasn’t been done for the big date of 29 March 2019, many folks want another referendum, and people in the EU may think the British have gone daft for such a drastic move.   I think everyone is sick of all the moaning on social media, I’d rather up and go and see some places.

Part of my reason to visit all the mini countries in Europe like Gibraltar, (2015) Monaco, (2005), Iceland, (2005) Malta (2014) and Andorra (tried to get there in 2017 and failed) was to look at some of these nations that not everyone has heard of and see what makes them tick.  I plan to do Andorra again, and Liechtenstein next year. 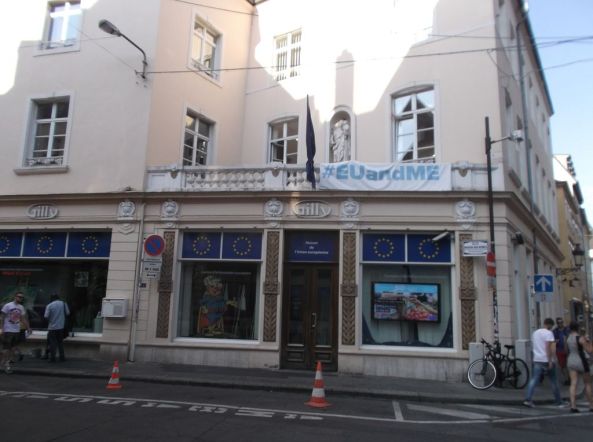 I got to go past this EU building.   It’s not exactly a big spectacular type of thing.  It looks like it should be an estate agents shop.

I guess a small shop/office gives a kinder, more PR savvy image of the EU here.

Unlike maybe this one.  One of the EU headquarters in Strasbourg, which many people have pointed out it looks like paintings of the tower of Babel in the Bible.  I’ve not been to Strasbourg but I did get home via Brussels on a bus going past many big mirrored tower blocks that were part of the EU administration.

Are people in Luxembourg happy with the EU?    This is a touchy subject which I decided not to ask.    I did see a lot of graffiti on the street behind which may be from bored youth or from Luxembourgers unhappy with the big blue establishment.   The rest of the city is clean and free from vandalism though.

Luxembourg is also home of Jean-Claude Juncker, current President of the European Commission.

Here is the UK embassy in Luxembourg.   There were some men erecting new CCTV cameras inside.