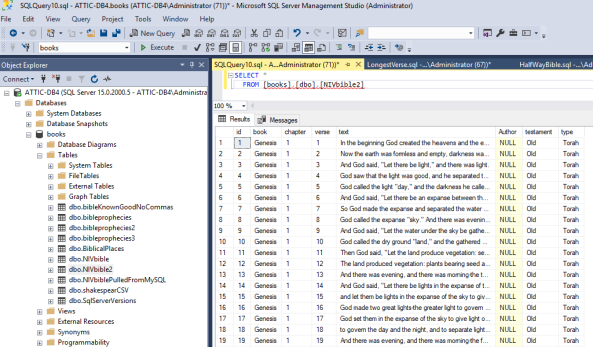 A few years ago, I left my regular job doing IT for schools to learn databases and the SQL language.    So I needed to do some study and learn stuff for myself.

I found a dataset of an NIV bible from MySQL then dumped it to a text file then uploaded it to my Microsoft SQL Server lab set up.   I’ve added a few columns to show old or new testament, and I’ll add which type of book later (Torah, Prophets, Pauls Letters, etc) a little later.

One thing I have always wanted to do is to take the bible and do some data analysis and look for interesting patterns or transform the data into readable charts.   I’m not really interested in weird stuff that’s on the internet like Gammatria, more looking for patterns of things that would encourage me and other people to study more.

The book of Genesis has the first generations of men who all lived to a long time and therefore had a lot more than today’s 3-4 generations of a family alive at once which would have made family parties interesting.    I’d like to make some charts of all the prophecies Jesus fulfilled and some of the places Paul trekked to and make some fancy diagrams using Tableau or similar.

In my regular church, we are studying Psalms 119 which is the longest chapter in the bible.   Its often well thought that the middle of the bible is here.

But actually, is it?   Now, this depends on your bible and translation.   Also how many lines of text and size of print in a paper bible, if you go by counting the number of pages and divide this amount by two you could get this.

It seems most people agree that there are 31,102 verses in the bible, including the King James.

So my Database server says the same.

Some folks have mentioned the shortest verse is John 11 : 35 “Jesus wept”

Actually, Jesus wept, is the 7th shortest.  Wait, why is there hyphens and “See footnote”  seems my NIV has some differences from other bibles.   If I run this query without these, its Job 3 : 2.

With King James, yes Jesus wept is the shortest, at 11 characters.   I might try and push the Hebrew and Greek texts in some time.

Here’s the longest verses in NIV and KJV.

I’ll cover more later.  Feel free if you would like me to look for some patterns of interesting things in the bible.

2 comments on “Fun with Bible & Data Science 1. Middle and shortest/longest”