Due to some major problems with my flight, I was now going back to Israel via Budapest.  Sometimes this can take some thinking, lots of Eastern European capitals start with B for some reason.  Budapest, Bucharest, Bratislava, Belgrade, etc.  But I have not been to Hungary, I did IT support some software engineers who worked for Ericsson in Hungary last year though.  Unusually enough some friends from Finland tell me there language (which is nothing like Danish, Norwegian or Swedish) is closer to Hungarian than anything else.  I also have an Aunt who is a Hungarian Jew who is a holocaust survivor.

The flight was with Malev, Hungary’s national airline, although the first part of the journey was from Heathrow to Budapest with British Airways, its nice not to being flying with a budget airline and get the perks like a decent sandwich and drinks on this fairly short flight.

If you are hungry in Hungary, I got this unusual pancake (ham, egg and lots mustard) from the cafe in the airport which with a coffee cost me 7 Euros, a lot but I didn’t get any Hungarian (no I can’t remember what their currency was without looking on the web 🙂 ) money out, as this was a last minute trip.  This stop over was about 6 hours, I did get a chance to leave the airport, and just saw a car park and a half finished building site, as I didn’t know how far away the city centre was, I decided just to stay put and sleep.   At least unlike the cruel designers of UK airports who make the seats so you can’t lie down on them, here in Budapest there are no rests on the seats so sleeping is quite comfortable.   There were of course people crowded round a TV watching the world cup also.  Outside it seems that gone are the days of old eastern bloc vehicles I saw when I went to Poland years ago, the Hungarians drive modern Skodas, Renaults, Opels and Mercedes.

Lastly, I maybe did get one glimpse of a nice part of Budapest, from the window of the plane.  I am pretty sure that this is the river Danube. 🙂 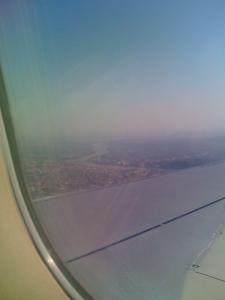 The last part of the trip back was fairly uneventful, but touching down in Tel Aviv was nearly 4am, and once on a Sherut I headed back in my flat in Jerusalem at 6am, meant I had been travelling about for close to 24 hours.

Just reading a friend Jon B’s visit to Turkey on Islamic culture, reminds me of something.  At Heathrow airport I had a long wait for my flight, and I saw a sign about a multifaith room, a kind of politically correct euphemism for a one size fits all church for any faith.

There is a church in at least one of the hospitals in Portsmouth, there is also a multi faith centre in the recently built £40m Lymington hospital in the New Forest I worked at sometimes about 18 months ago, when I visited this, I was pleased to see judging by the literature put out it was mostly had Christian books and bibles there.

Here is this one in the shiny new and hopefully post-problematic Heathrow Terminal 5, is one of these places, so I decided to take a look, as there’s only so long you can spend reading books and magazines you aren’t going to buy in WH Smiths. 🙂

Firstly apologies to the chap bending over, it was hard to get a quickie shot of this place without appearing to be disrespectful. 🙂  When I went in there and first of all unlike any religious establishment there is no symbol on the wall of any deity, or any centre point to make the room significant apart from the screen reminding passengers of upcoming departures.  There is a wooden cabinets with labels for Christian, Jewish, Muslim, Hindu, Sikh and other holy books.  There are signs asking people to be respectful and not use it as a place to sleep or do baby changing.  The place also smells like a gym changing room as people take their shoes off at the door.   I didn’t bother at first, but there were five Islamic worshippers here at one point and one of the pointed out I should do the same to be respectful so I likewise decided to comply.

Out of the ten people I saw that went in and out of this place nine of them were Muslim, each borrowing a prayer mat from the cupboard, at least two of them were employees of the airport, one was an Indian gent (I think Hindu) with a piece of rope being held in both hands.   With some praying aloud in Arabic, it was a little hard to concentrate when I was reading a bible at one point, but it got me thinking.  There was a message from a Chaplin about that people should ask permission before leaving any literature in the cabinet to avoid causing offence.  I am not sure if the Chaplin has a sit-on-the-fence attitude to the Christian God to try and ‘not offend’,  just a general admin bod employed to keep the places clean and tidy, or someone with a real zeal and love for Christ but wants to be a servant to people not following the Lord.

Where as we could get alarmed at the number of worshippers of faiths other than Christianity being practised in the UK changes our culture, (and oh how the BNP and similar fascist groups and their ilk love to rub this in) but how many of us Christians actually make the effort to go to one of these places and maybe spend time in prayer before a journey or silently pray for the other users of the room for them to find the loving acceptance of Jesus?  Maybe if we did we would have very different faith landscape in the UK.

If anyone in church leadership is reading this, I would like to know what you think.  Is it a spiritually difficult to pray in a room with people with other beliefs or is worshipping Jesus here could be a good way to pray for others, or are these rooms pointless.  Those of you who are Christians travelling to other lands blogging on airport things too.  Please let me know your comments.

Our UK office had some IT gremlins that was making things a bit hard for them, so I volunteered to go out and get a train all the way to Bridgend in South Wales and stay with one of the managers there.

Going long distances on a train is very pleasant way of traveling.  Gone are the days of ancient slam door trains which had some charm, even if you had to stick your hand out of the window to open the outside handle to get out.  (I used to commute from Fratton to Fareham back 10 years ago) Modern fast trains means getting around the country doesn’t make the UK look like an embarrassment compared to the transport systems of the rest of Europe.   Going by rail means you get to see all kinds of things you don’t see in a car or bus, peoples gardens, derelict factories, nature, mostly deer, rabbits and foxes that aren’t afraid of being close to the line, also a glimpse of the city of Cardiff with its mix of old and new architecture together blended well.

This was great as I managed to get almost everything done there (apart replace one antivirus app which I did later using remote software)  The new email system was put in, and the old email addresses were merged into the new system.  Google Apps, which includes the business version of the popular web based mail client Gmail is quite a pleasure to set up and use, some aspects are a little quirky maybe to get used to if you are used to a traditional Microsoft Outlook client for email, but better when you get more used to it.  I will blog more on specific aspects of this another time though.  The migration project was a complete success even though this was a new type of project I have not done before, plus it didn’t cost anything to our organisation either, I have had one support question to answer for this team so far which is better than I expected.   The staff will not use Google’s word processor or spreadsheet app at this time, as they will stick to Word and Excel like the rest of the organisation for the time being. 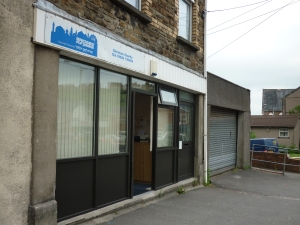 I needed to go out and buy a new hard disk to replace one that was too small on one staff member’s PC, this was done just as the office closed and I fitted it and cloned everything across the next day.  The rest of the time I replaced Internet Explorer with Firefox, Nero with Infrarecorder for CD burning, Windows Media Player/Quicktime with VLC player for playing all kinds of audio and video content.  All these apps are just more simpler and efficient without the drag of unexpected (annoying search toolbars etc) bits included, open source can work extremely well in business, seeing as applications can be written more in mind of people who used them.

The evenings I spent in Wales were also good, I got taken out for dinner at a very old pub (at least 300+ years?) in a nearby village, this pub had a large collection of Toby Jugs hanging from the ceiling, and looking outside on to the garden there is an aviary with budgies in but also some chipmunks, which I noticed one of these furry fast movers had got out and was running around the patio.  After a nice cod and chips and pint of Brains (beer from Cardiff)  I did a brief bit of remoting into the office from my laptop to check on the 2800 emails to migrated over to the new system from one user which took a few hours to do.  The next day we went out for a curry as well, so I was extremely well fed on this three day trip.   The pictures didn’t come out right on the phone, but the beach outside had views over the sea onto Devon!

During the time in Spain, using this beat up clunker of a Gateway laptop in the hotel on their free wireless the day before the wedding I got the news I had been waiting for, my sister Claire and her husband Jim had their first child, Beth Naomi Saunders.

Once back in the UK I tried to catch up and see various friends although I only some people I was hoping to see.  I had to work from home, taking into account the time zones, meant I needed to be in front of a laptop 6.30-3pm weekdays apart from 1pm on Friday.   This gave me a chance to fix some things back in Jerusalem using remote software (I do now really like Logmein) and draft out a new email system for our UK office.

Anyway for the first few days it was necessary to give Claire and Jim and bit of time to recuperate and so just me and mum went to visit it them in St Mary’s hospital (where myself, Matt and Claire were also born in 76,78 and 82)   This was a slightly weird feeling, as you know its a very special day when you see a new member of our family for the first time.

Strangely Beth is now the fourth member of our family to be born on a 29th (she arrived in May)  For me I was glad to be around soon after birth, she is very nice and Claire and Jim seem to have adapted to being great parents quickly, although a bit of shame I am not around much to see Beth grow up this year though.