Lunch time I sat at a typical street side fast food place and got a Chicken Schnitzel sandwich. This was a bit cheaper than in Jerusalem, although bottle of Coke I got with it, was not proper Coca Cola but a cheap substitute made in Turkey.

When I had almost finished this, I saw two boys carrying a wreath of flowers.   A short while later there was a large group over people walking down the street, with two coffins being carried down.

I was walking this way anyway, so I walked along from a safe distance.   The man in the place where I had my lunch told me an Arab youth had been killed in accident.

After stopping at a cemetery just outside of the old city walls of Akko, there was a grave waiting.  I noticed all the people on the walk with the casket were entirely men.  I don’t know much about Islamic funeral practices but I did wonder where the mother and women of this family go to grieve, I noticed that one of the caskets was open with the lid askew.  I am not sure if there were two people to be buried or if one of them contained artifacts for the funeral.  I did notice when the body was laid in the grave, a series of concrete slabs was laid over the top before the earth was replaced. 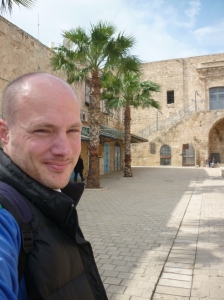 I don’t know for certain, but I am sure this death was the result of a car accident.   An Arab friend recently showed me a picture of a wrecked Fiat car driven by a teenager who was killed after a head on crash on the Mount of Olives in Jerusalem.  If there is one practical thing that could be done between the Israeli government and Palestinian authority they could work together on improving road safety here.  I would like to see penalties for bad driving, people using phones at the wheel and other things which seem common here.   The fines could be invested back into improving roads and cutting accidents.

Road accidents kill more Israelis than terrorism and wars, so anything that can be done to make travel safer is good.  I took some time to discreetly pray for the family of the young lad who was buried today.