This was maybe 3 or 4 miles walk from the centre of town, the precipice was something I have read about, its the hill in Nazareth where people tried to throw Jesus off the hill after hearing him speak, thinking it was blasphemy.

The hostel was a bit boring, I got chatty to various people, including the staff there and mostly families staying and few other people who were on their way out, but there were no chances to go and explore places of the bible with any other Christians, as hostels are usually great places to make friends, especially when I have been to some in France, Iceland and US.

No matter, I left my iPod at home, so it was a good way to enjoy a week long break from work and see some sights. 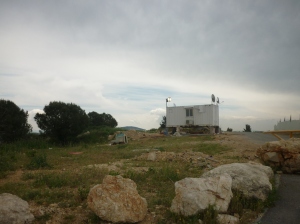 I went off a road to a car park where there was some construction going on, hoping to get some good shots of the hill.

I walked towards this shed on the left, then I saw a couple of fierce guard dogs were there…

Taking pictures can be awkward on your own and without a tripod, I tried using this abandoned car to stand my camera on and do a timed shot…

I kind of got hidden by the wildlife though!

Here is some better pictures of the precipice:-

As below this passage talks about Jesus was threatened up here:-

Luke 4 : 28 -30  All the people in the synagogue were furious when they heard this.  They got up, drove him out of the town, and took him to the brow of the hill on which the town was built, in order to throw him off the cliff.  But he walked right through the crowd and went on his way. 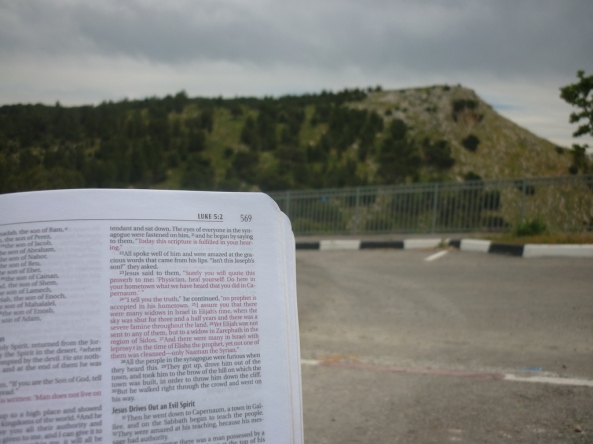 I am next going to head up and see how much of the Galilee is visible from up there:-