This is one must see in Nazareth, its a 100 year old Arab business selling spices but also a lot of other food by weight, not only is there an exciting array of exotic smells of items generally absent from clinical western supermarkets.. 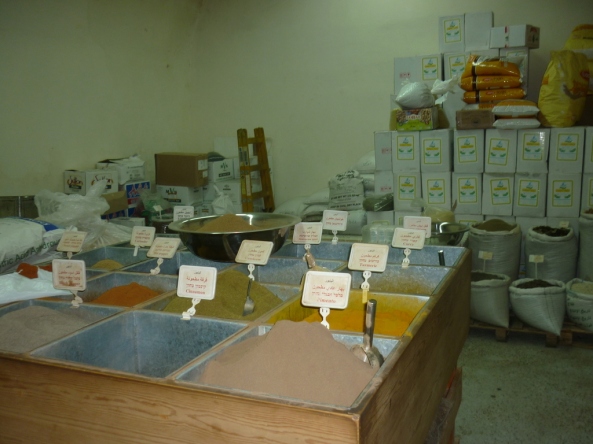 ..is watching the equipment used for making and processing the products they sell.. 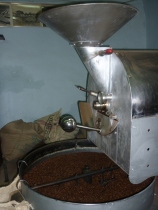 Left is ancient machinery that runs on steam for processing chick peas, on the right is a huge coffee roaster.

Where as this is more of a retailer in the traditional model here in the middle east, it got me thinking, in mid 1980s UK, various shops I know tried experimenting with pick and mix for all kinds of things, of course most people think of Woolworths for sweets sold by weight, but also my home city of Portsmouth, there was a store selling everything by weight including nuts, cornflakes, flour, etc in large storage bins which required amounts from customers are put into bags and weighed with minimal packaging.   This died out after a few years probably due to hygine concerns.

Here in this store you can buy all kinds of exotic spices, teas, coffee, nuts and dried fruit etc.    If you are used to the ‘Shuk’ (the outdoor market in Jerusalem, than this is not really a novelty, but this particular retailer seems to also sell things wholesale and get some items from abroad too (ie: from Turkey)

I got 200 grams of these brightly coloured sugared almonds which look quite old school.   Think the last time I had these in the UK as a lad they are often extremely hard and people have been known to break their teeth on them, but these are soft and very pleasant here.  Cheap too at 6 Shekels (£1 or s0)

Check out the store’s site at www.elbabour.com – Mostly Arabic, some in English so use http://translate.google.com

Just taking a brief break from Nazareth, I thought I would share an important place on the way up….

This road looks actually quite exciting as it goes along a viaduct into a tunnel in the side of a mountain to Nazareth, but the bus took a left at these lights.

But before I came to here on the bus went through the town of Ha Megiddo, which in the Greek; Armageddon as mentioned in Revelation , the place of the end of the world.

Its mentioned in Joshua, Judges, 1 and 2 Kings and first Chronicles.  There has been previous battles here.

This is a prison in the town of Megiddo, I think it contains long term offenders, ie: terrorists.

A little while ago, some archeological remains were found underneath (hopefully not from convicts trying to tunnel out!)   showing some very significant history of early Christianity underneath the prison.  Check out this link:- http://www.mfa.gov.il/MFA/Israel+beyond+politics/Megiddo+Prison+dig+yields+rare+3rd-4th+century+Christian+structure+9-Nov-2005.htm

Some people have said that this find is important enough to tear down and move the prison to somewhere else maybe.

These fields look nothing that special, but in the middle is where the last war will be fought it seems.

Petrol station if you want to get fuel, go to the loo, get a can of Tango and a choc-ice before the end of the world.

Revelation 16 : 16 Then they gathered the kings together to the place that in Hebrew is called Armageddon.

Now Revelation is a very symbolic book and probably the most difficult part of the bible to understand, but its quite clear this is the place outlined.

Many people I speak to think that Jesus’s return is not far away, I see more people slandering God, Jesus, Israel, Christians and the Jewish people today than in the past, here in Megiddo is a place where you want to be on the right team when that battle happens.