For sometime now I’ve been fascinated with the stories of the cave churches in Turkey.  Early Christians converted these caves into dwellings and early churches.

The strange landscape in Cappadocia I think I originally saw in one of Michael Palin’s travel series many years ago. 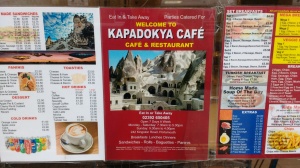 This is outside of a Turkish restaurant in Portsmouth I saw a month ago.

I originally wanted to travel to Turkey last year, but only having enough leave last year to go away for a long weekend, it didn’t see worth it, so I went to Norway instead.

In the beginning of April I took a week off and booked a flight to Keyseri in central Turkey. After I ordered my tickets I got to see on the news there were bombs going off in Istanbul and Ankara, some killing tourists from Israel and Germany.   As someone who has lived in Israel 2009-2013 I have been closed to places where tragedy has happened.   I didn’t plan yet to cancel my trip as 1/ I’m only going to small towns in Turkey, 2/ It would be just is risky to travel to Paris, Brussels or even London.

The UK Home Office web site stated that they only don’t recommend not going within 15km of the border with Syria.   Still I carefully watch the news, and I really wanted to see this place as I know in the future things could change and some places in the middle east like Turkey may not be possible to visit in the future.

Next  2. Getting to Goereme in Cappadocia