In spring of this year, I was working for a big telecoms company and they needed to send me out to install new computers in their European offices in Lisbon, Stockholm, Vienna, and finally Barcelona.   A group of other London based IT pros in my office got to go out to Zurich, Paris, Dublin, Madrid, Frankfurt and some other places.   This was a really interesting couple of months.

So in Barcelona, I came here before quite a few years ago when a friend was living out here.   After getting the project done well just straight on the deadline, I took a look around the town.

Walking around the city, I have this Freddie Mercury song stuck in my head for some reason.   Much of Barca looks a bit like a US city seeing as the streets are in a perfect parallel grid fashion.

After working for a Christian charity in Israel for four years, it’s funny that people I used to volunteer with find themselves in new and different places but in this case, two different friends of mine were in Barcelona at the same time.   One was in a hotel 20km away from me also on a long project.   This was a difficult journey to get there with taxis on strike (maybe upset about impending Uber expansion?)  so using the bus was fine but required 30-40 stops and another 30 mins of walking to see my friends on the outskirts of the city. 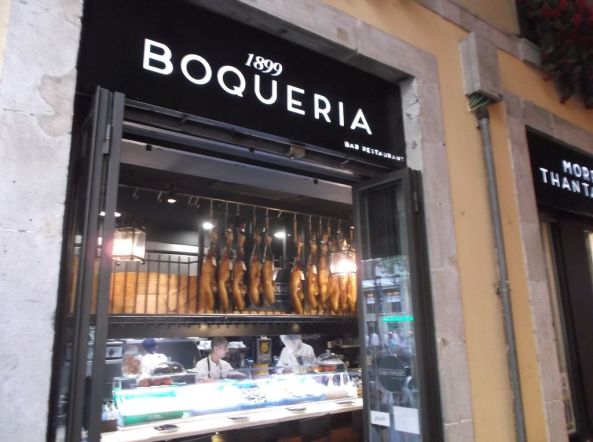 Deli shops with jamon (ham) hanging from the ceiling at common here.

My other friends who were volunteering back in 2009 and studying IT at Uni, now have a successful IT business in South Africa.   It was great to see them after so long.  We met up at the La Ramla, a popular tourist strip.   This was a little disappointing as I ordered a Paella which was 15 Euros and arrived somewhat small and not very inspiring.   The beer was 8 Euros a glass, so I ordered a lemonade and not checking the prices, found out it cost me 7, bah.

The strip is a funny old place with African men with blankets of fake handbags and sunglasses, and more traditional touristy shops as well.    The top of the strip has some more interesting places to see including a kosher Jewish restaurant.   Later the Jewish restaurant caught my eye again in the news in August as in this street is where someone rammed a car and killed 13 people.   Palestinian style attacks now are happening in Europe, this is so sad and frustrating when it seems often Europe isn’t prepared for these threats like Israel is.

From a Christian perspective, I didn’t get to find out if there is anything in the way of evangelical churches in this part of Spain.   It’s a big place with a lot of young people.