I saw this rather concerning thing, these two newspapers on sale outside a French shop in Toulouse:-

The paper on the right is the UK based Daily Mail.   The Mail is often considered to be racist for heavy coverage of immigration and concerns about terrorism in the UK, as was pro-Brexit.   The paper is greatly disliked by some.   I think it’s quite a poor newspaper but understand why people are not comfortable with a lot of immigration which has minimal vetting. 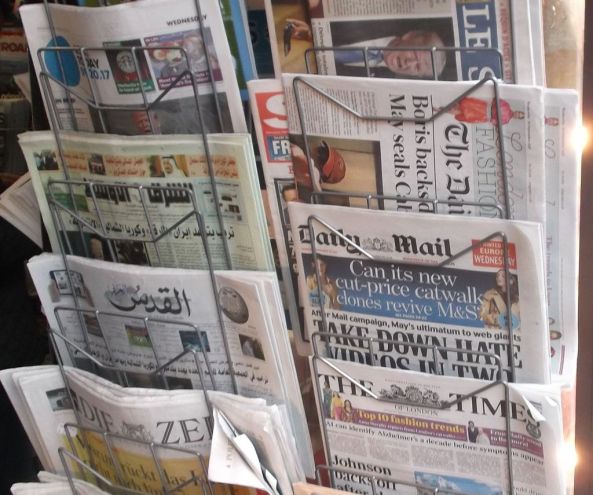 The paper on left in Arabic is Al Quds.  This is a Palestinian newspaper.  Also shown is The Sun, Times, Telegraph which all have a very different style of news and audience.  The bottom left paper is in German and the other Arabic one I am not sure of.

Many people in the UK might consider many things like this to be an equal comparison of two bad news channels.   These sorts of people have never been to a middle east or a Muslim country where you are unlikely to find free of speech or religion.   Al Quds is the Islamic term for the city of Jerusalem meaning “the holy”   Quds/Qudus is similar to Kodesh which is the Hebrew word for holy as Hebrew and Arabic have certain similarities.   There is a big problem of incitement from the media in the Palestinian territories.

A friend told me on the way by text message that this was the city where Jewish people were killed outside a school a few years ago which I now remember well.    I actually saw not that many Muslim people in Toulouse but with newspapers on sale like this, it makes me worry what ideas they are giving people.