This week I’m meeting up with some close friends I used to work with in Israel.   There is an event at the Royal Albert Hall in London for the 100th anniversary of the Balfour Declaration, an event to celebrate Britain playing a part in creating the modern Jewish state.

Not that far away from the Israeli embassy too.

I saw something interesting around London a few weeks ago.   In London’s financial district there is always construction going on. 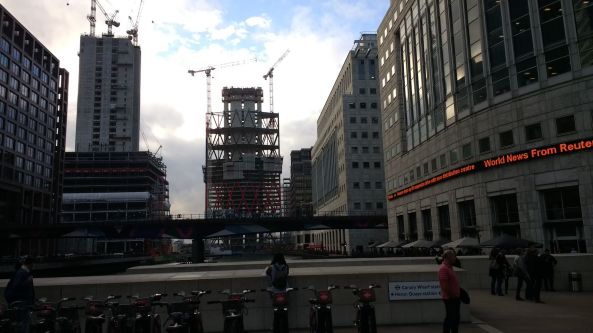 The building here is constructed in a specific way, the centre core of the block which I guess contains the stairs and lift shafts is done first, kind of like the spine of the building, then next the floors which is kind of like ribs and maybe limbs, last is the outer structural parts which the walls and glass windows fix onto.

Near my church there are lots of these type buildings made to the same method, one of them stayed as half a spine and got no further.   Perhaps a victim of the 2008 recession which stayed abandoned as a concrete stump for a long time before being bought by another company then demolished and a different building going up its place.

The bible talks about something similar.

Ezekiel 37 : 1 The hand of the Lord was on me, and he brought me out by the Spirit of the Lord and set me in the middle of a valley; it was full of bones. 2 He led me back and forth among them, and I saw a great many bones on the floor of the valley, bones that were very dry. 3 He asked me, “Son of man, can these bones live?”

4 Then he said to me, “Prophesy to these bones and say to them, ‘Dry bones, hear the word of the Lord! 5 This is what the Sovereign Lord says to these bones: I will make breath enter you, and you will come to life. 6 I will attach tendons to you and make flesh come upon you and cover you with skin; I will put breath in you, and you will come to life. Then you will know that I am the Lord.’”

7 So I prophesied as I was commanded. And as I was prophesying, there was a noise, a rattling sound, and the bones came together, bone to bone. 8 I looked, and tendons and flesh appeared on them and skin covered them, but there was no breath in them.

9 Then he said to me, “Prophesy to the breath; prophesy, son of man, and say to it, ‘This is what the Sovereign Lord says: Come, breath, from the four winds and breathe into these slain, that they may live.’” 10 So I prophesied as he commanded me, and breath entered them; they came to life and stood up on their feet—a vast army.

The modern state of Israel was birthed in 1948, and this scripture points at a promise towards its realisation as a homeland again for the Jewish people and flourishing as a democratic nation.

Today most of Israel doesn’t know their messiah Yeshua (more commonly known by you and me as Jesus)   The finishing part is yet to come.