Jewish people around the world and Evangelical Christians have an affinity with Israel and often prepared to put finances and prayer and support and hard work into defending this land, when hostility or apathy abounds.

This may seem depressing, but in order for those who have faith in the Jewish Messiah I think its necessary for us to be less to put less trust in governments and rulers and more in how our Father in heaven would weaken all rational forms of governance and strengthen our faith in the plans for Christ’s return.

But it is on social media I’ve made a few friends with some people groups who want to offer a hand to the Jewish state. 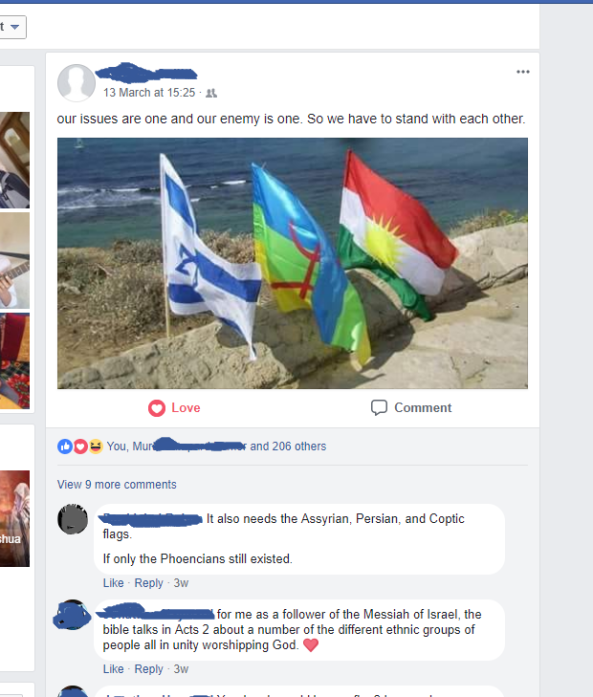 Maybe its because they get Israel is a democratical nation?  maybe its the history or the never give up attitude of the Jewish people?  or, even memories of Jewish people who once numbered thousands in North Africa and other parts of the Middle East?

These folks I spoke to on Facebook are Kurds from Iraq, Turkey or Syria who feel they are a separate ethnic group to Arab people.    The others are Amazighs, or we might commonly call Berbers, native people of North Africa in Morocco, Algeria and Tunisia.  These people tend to be non-practising Muslims or secular.   They have grown up in the stranglehold of Islam and long for something different.  They feel that their culture predates invasion by Arab Islam, just like Israel.

I visited Morocco in 2005, and noticed straight away there are two different ethnic groups in North Africa.    I like the food, clothing and textiles, artwork and other aspects of Morocco which is similar to the middle east but different.

Every politician in the UK wants to have a selfie by a mosque on their Twitter profile so they can show they are multicultural and ‘progressive’ they are.  Sigh…

I’ve chatted quite a bit online to a couple of Amazigh young men.   They are smart, but live in poor isolated villages.  They have a love of animals (animal cruelty is a big problem in the Islamic world) They have questions of faith, how Christianity and Judaism and Islam differ, some of them want to know the Bible and the Messiah of Israel.   Some already know a different path in faith could cost them.   One has already found Christ.

I’m now needing to find other Christians who can help disciple some of these people who ask me questions.   One is female and would be best done by another female.

This kind of thing excites me a lot.

Matthew 9 : 37 Then he said to his disciples, “The harvest is plentiful but the workers are few. 38 Ask the Lord of the harvest, therefore, to send out workers into his harvest field.”