What makes you think is the best place to showcase cars?   normally car shows are in Geneva, Milan, Paris or even Monaco?  These are almost certainly dwarfed by this event.   The Shanghai automotive show is THE biggest car show in the world.

You will see European, Jap & Korean and American brands, but also Chinese makers that are unfamiliar to the rest of the world.   Every brand I could of think of is represented here.   Actually, the most popular brand of car in China I noticed was VW.

Imagine, a large sports stadium, multiply that by 6, there are so many vehicles to see, it was actually closed by the time I got round to see everything.

Qoros is little known in the west, they are Chinese car maker which worked with Israeli hi-tech partners to do some of the R&D.

The Chinese saved the MG brand from Rover’s demise in 2006, they are still going strong in Asia, but I’m sure how well they convinced British and Europeans to buy MG again.

World famous brands like Ford and Toyota will have family cars and sports cars alike, as well as a small museum with some vintage models as well. 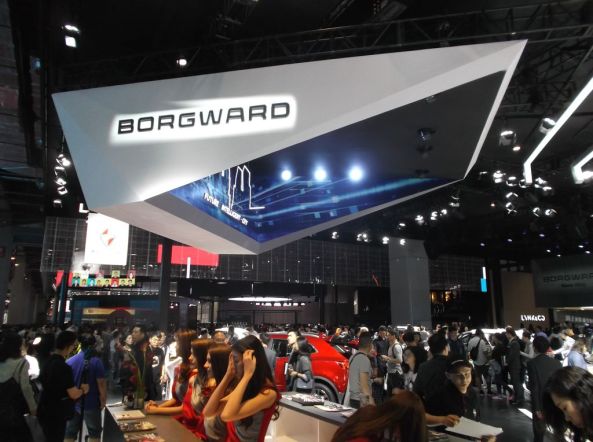 Marketing cars in China, is from before when car shows in the UK were nervous of political correctness, as armies of beautiful girls in identical outfits are paraded around and supply visitors with marketing literature.   I took home a Chinese language Jaguar F type brochure.

Not just conventional, exotic cars and SUVs, but commercials, trucks, buses and military vehicles too.    Above: makers of car components are there to sell to makers also.

Much of the western motor manufacturers, including BMW and Mercedes, build their cars in China to sell to the Asian market.    This event showed a staggering scale of the demand for nice cars amongst middle to high earning Chinese families.