Last week, I was out and about at the Shuk (open air market) and notice some people have the tents already up for Sukkot, this was a few weeks early, I suppose just like us folks in Britain complain the shops display Christmas stuff in late September.

There was something different about this tent though;

I really like the illustrations of Jerusalem from long ago on this Sukkah, its beautifully done.   The shapes of these buildings in the old city are easily recognisable from the ones from today, just there is a busy main road where people are taking camels through.

This side is quite exciting, as this shows this special gate which visited twice before (see here) as its where the scriptures tell us our Lord Jesus will return via this side of the city.   Only thing is if you look at my previous blog article you will see the distinctive double archway entrance is blocked up and has an Arab cemetery in front of it, trees, thorny bushes and railings stopping anyone from making a path to there.   Actually these specifically placed obstacles aren’t going to stop our Lord and King from his return, which is probably soon!

Wonder if anyone could mention who did these nice illustrations. 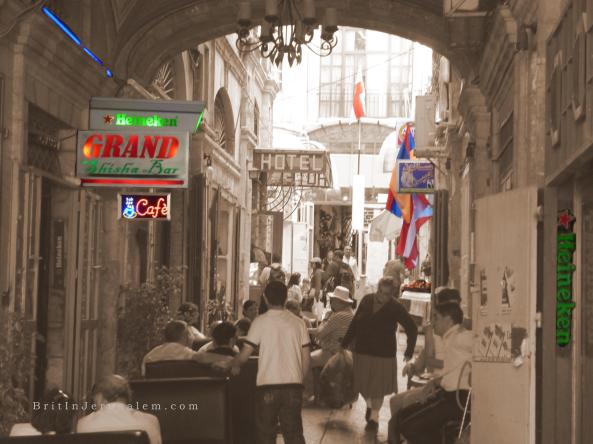 Sometimes you often see graffiti, most of it is in Hebrew, some of it looks quite interesting, sometimes its done legally.

These pomegranate fruits are put in the corners of the tops of the walls, just like King Solomon did. 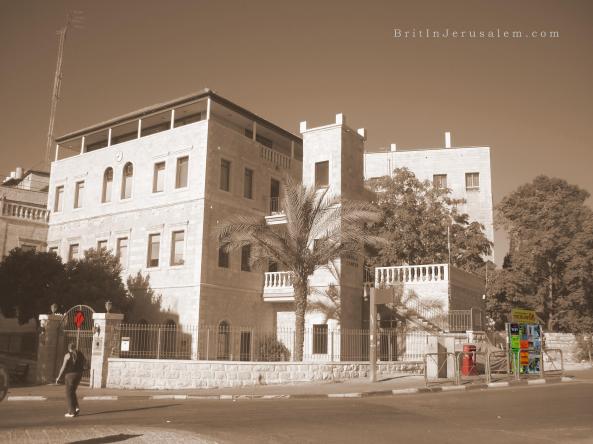 Opticians shop has an modern but characteristically Jerusalem look to it. 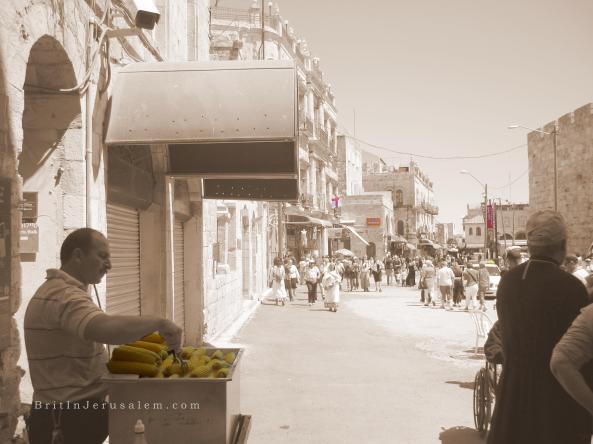 Unknown building in the middle of Islamic cemetry, which has partly bricked up doorway.

The Dung Gate.  Faces towards the Arab district of Silwan and King David tunnels.

Later on Monday afternoon I went to meet up with a new friend who is Australian born but living in the the UK I got to know from my church, he is just a casual visitor here on holiday, and him together with some other (two Scots, one Aussie, one Danish) people from the hostel he was staying at, we got to do some Easter sightseeing.  A quick visit to the church of the Holy Septelcur, before meeting up with the other guys, some fairly random circles around the city seeing as the narrow streets get a bit disorientating sometimes.  Seeing the Via Delarosa, the street where Jesus carried his cross after being sentenced, then grabbing falafel and ice cream and just a lot of chatting. 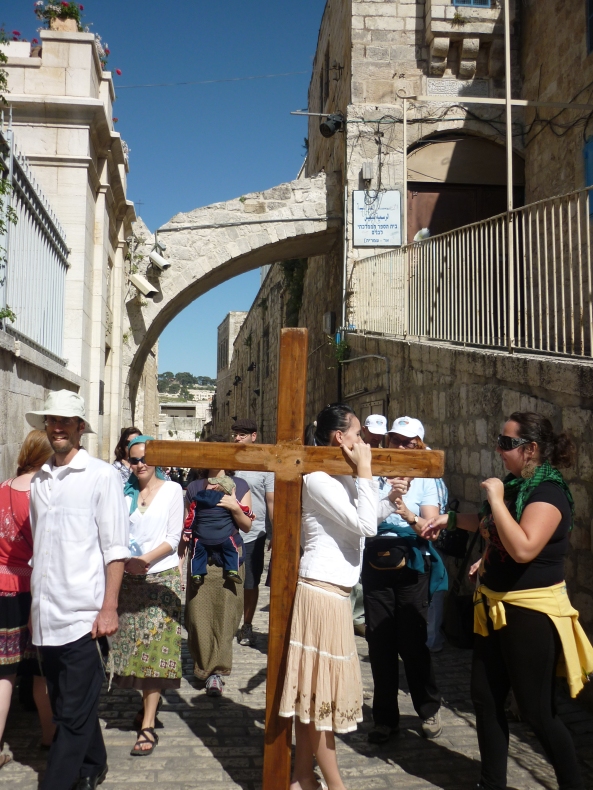 Here this tourist lady has borrowed a cross to get a feel how Jesus would of carried, on the Via Delarosa.  His cross would of been much larger, and the fierce heat and the severe wounds from beatings before hand would of made this unbearable.

When I came back to where my bike was parked, I was horrified to see it in bits still locked to the railings opposite the Jaffa gate, I looked around hoping it was someone elses and mine was some distance away, no, I had been a victim of a crime.   I parked it here, as being such a big famous part of the city where thousands of people pass through a day, that it would be safe.  It was chained up, but because it has quick release levers for the wheels, someone had tried to steal the wheels, but then abandoned them.   After depressingly mumbling to myself and to the people next to me that this was not fair that had decided to take/damage something that wasn’t theres, the couple offered me a lift home, I turned around and the man operating the kiosk of fresh orange juice (they have boxes of fruit and mechnical press to sell drinks)  said he chased away someone who was trying to steal parts of my bike.   So they took my rear flasher light, the levers of the wheels, theres a spring and one the brakes had broken off, and noticed one of the spokes is bent, but its otherwise all there.

This put a really bad ending on what was a really nice weekend, but I had two different lots of people who were my good Samaritans, the couple (who were bike enthusiasts anyway) who let me strap my bike to there 4×4 which had two other bikes on there, and two Arab kids about 12 who quickly knew how to fix my rear wheel back on and got the chain in the right place, this meant I could carry the bike one handed on one wheel back to their car.   I gave the children a 10 shekel coin each I had in my pocket.  I also got approached by a man asking for money for food, as all my small change was gone, I told him I was take his number and see if Bridges for Peace’s food bank might be able to arrange something.   I also got to chat to the kind couple about the organisation I was working for, what I was doing in Israel so far.   Anyway I was also hugely grateful of them being able to get my home rather have to find a big enough taxi or walk home with the bike in bits for 5kms.

I took it back to the shop today, they are replacing the nuts and the brake pads which got damaged, this should be around 100 shekels which isnt too much, but this is an expense I could do without.   Anyway I am thankful the Lord provided some ways of making this situation less bad than it could of been.

Went to an exciting outdoor show last weekend in the Old City.

Inside the David Citadel has a huge collection of illusions done with projectors. Check out this video.

Think of the castle with audio recordings of some people from hundreds of years ago speaking and shadows of the people of the time moving around. Once a group of 15 of us had walked around the edges of building we sat down for the main part of the show, this is an stunning piece of illuminated theatre which shows the walls on three sides of us were covered by moving imagery of Jerusalem’s history.  It was thoroughly enjoyable and unique way to show history in a spectacular way.  Even with the large group of us as were there early we managed to secure really good seats on a balcony.